Kevin McCarthy asks Dems to denounce alleged anti-Semitic remarks: ‘This will not be the end of this’ 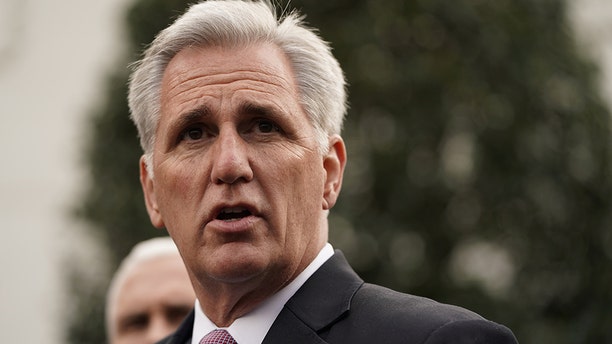 House Minority Leader Kevin McCarthy, R-Calif., tore into House Democrats on Friday for what he alleged was a lack of action against Democratic freshman lawmakers for alleged anti-Semitic remarks they made in recent weeks, comparing the situation to what the country experienced during World War II.

Tlaib, last month, questioned if Senate Republicans were more loyal to Israel than the United States. Following a report that GOP leaders were planning to introduce a bill that would punish companies that participate in the so-called "Boycott, Divestment, and Sanctions" (BDS) global movement against Israel, Tlaib said the GOP members “forgot what country they represent.”

That remark came just days after Tlaib vowed to “impeach the mother----er,” in a reference to President Trump.

Omar, meanwhile, recently faced backlash after she compared Israel to Iran, adding that she “almost chuckle(s)” when the Jewish state is labeled a democracy.

King on Friday compared the response to Tlaib and Omar’s remarks to the GOP’s reaction to the “white supremacist” remarks made by Rep. Steve King, R-Iowa.

“White nationalist, white supremacist, Western civilization — how did that language become offensive?” King recently asked The New York Times. “Why did I sit in classes teaching me about the merits of our history and our civilization?”

King was later rebuked by GOP leadership and cut from committee assignments.

“We took action on our own side. I think when they stay silent, they are just as guilty,” McCarthy said Friday, according to The Washington Post. “I think this will not be the end of this.”

He continued by contrasting the controversial comments “to what this country went through in World War II.

“We’re nowhere near anything like that,” he went on to say. “But why stay silent now? Have we not learned from the mistakes of the past? Have you not in a leadership position, have a responsibility?"