Is Virginia the Next Arizona? State Lawmakers Fuel Immigration Debate 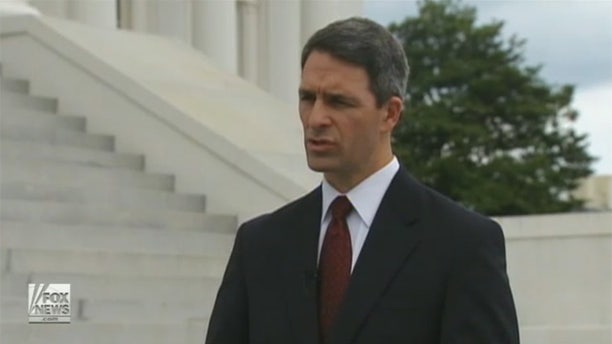 A handful of Virginia lawmakers may be positioning their state to be the next battleground in the immigration debate.

Virginia, one of nearly 20 states toying with the idea of an Arizona-style immigration law, hurtled onto the national radar screen this week after Attorney General Ken Cuccinelli ruled that police can ask people about their immigration status during routine stops.

While a northern Virginia county has been at the forefront of the push for stricter local immigration laws for three years, none of this activity has prompted the kind of nationwide backlash -- in the form of boycotts and a federal government lawsuit -- that Arizona triggered with its law in April. Those behind the Virginia proposals, including a proposed statewide law, are hoping their state can avoid the kind of public relations and legal pitfalls that have, at least temporarily, ensnared Arizona.

"This is good policy. ... It's both constitutional and prudent," said Robert Marshall, the Republican state delegate who originally requested the ruling from Cuccinelli, who is also a Republican. "Our actions here can't be dismissed."

Marshall told FoxNews.com he has asked Republican Gov. Bob McDonnell to issue an executive order codifying what Cuccinelli wrote. He expressed doubt that any single piece of legislation will pass through the state Senate, but he suggested a carefully worded directive could help shape the national debate.

"Unlike Arizona, you wouldn't say every time you stop somebody, do this," Marshall said. "I think that was one of the reasons the Arizona law was (blocked)." Marshall said he's confident Virginia's policy would be held up in court if challenged.

Cuccinelli also cited that difference as a key distinction between the two laws.

"The difference, of course, is that the Arizona law enforcement officer is going to be under the cloud of the requirement of that statute," he said. "But the way we operate it here, we're in good shape."

A spokesman for Arizona Gov. Jan Brewer said the governor is reviewing her state's law to see if it can be refined in light of the court decision blocking key parts of it, but was not sure whether she was considering the possibility of making immigration checks discretionary as opposed to mandatory.

Though Cuccinelli's ruling drew widespread attention, it's unclear how much direct impact it will have on Virginia law enforcement.

"Is it going to affect a single thing? The answer is no," he said. "A majority of the police forces won't bother with it."

Saslaw noted that per Cuccinelli's opinion, state officers are still advised against arresting anyone for a civil immigration offense. Saslaw said he doesn't see Virginia, a non-border state, becoming a focal point of the immigration debate any time soon, and he rejected the idea that McDonnell could issue an order codifying Cuccinelli's ruling.

"We don't have a dictatorship in Virginia," Saslaw said. "It would carry absolutely not a shred of legal validity."

McDonnell spokeswoman Stacey Johnson said Marshall was not specifically calling for an executive order. The actual letter to the governor asked McDonnell to "direct all appropriate law enforcement officers of the commonwealth to implement the policies referenced" in the Cuccinelli decision.

Regardless of how Cuccinelli's ruling is interpreted, a few Virginia lawmakers are pushing hard to keep their state in the middle of the immigration furor. Though it's not anywhere close to a border state, Virginia's illegal immigrant population, concentrated mostly in the north, has been pegged at about 300,000 by the Pew Hispanic Center. Any crime connected to that community has the potential to feed the debate.

Just as the killing of rancher Robert Krentz by a suspected illegal immigrant fueled the push for border security in Arizona, a recent killing in Virginia has stirred emotions over the issue. An illegal immigrant on Sunday was involved in a crash that killed one nun and injured two others -- he reportedly had a prior drunk-driving record and was going through deportation proceedings.

The crash happened in Prince William County, which is ground zero for immigration controversy in Virginia. Board of County Supervisors Chairman Corey Stewart seized on the incident, as he continued to push a proposed immigration law similar to Arizona's.

Stewart said in an e-mail to FoxNews.com that Virginia will "adjust our course" in light of the Arizona case and said he hopes the federal government decides to sue his state too.

"Virginia has shown in the past that people care about this issue even 2,500 miles away from the most porous parts of our southern border. Especially in Prince William County, we are very close to the nation's Capitol. Harry Reid, Nancy Pelosi and President Obama can't ignore what is happening in their own backyard," he wrote.

Prince William County, which Marshall represents, has a local law that requires police to ask about the immigration status of anyone they arrest. Stewart said Cuccinelli's ruling doesn't dramatically change anything there but that "it is good have the Virginia AG on board."

Stewart is pushing for a statewide policy to require police to check the immigration status of anyone they stop or arrest. He claims the proposal anticipates the legal pitfalls that trapped Arizona. He has launched a political action committee to raise money for a public campaign in support of the bill, and he has a started a website, www.virginiaruleoflaw.com, where he is trying to collect 100,000 signatures.

"The bill ain't gonna make it through the General Assembly," he said. "It won't even get to a law."