The U.S. Court of Appeals for the Armed Forces will consider a request by former Army Sgt. Bowe Bergdahl that his case be dismissed, or that other relief be granted, based on unlawful command influence. His attorneys have argued that comments made by President Trump possibly swayed the outcome of his trial.

The court made the announcement on Monday, months after the Army Court of Criminal Appeals rejected the notion that Trump's public comments, as well as those of the late Sen. John McCain, had influenced the proceedings, Army Times reported.

“Although there was some evidence of unlawful command influence adduced at trial and in the post-trial process, the government met its burden to demonstrate that an objective disinterested observer would not harbor a significant doubt as to the fairness of the proceedings,” the three-judge Army appeals court opinion read. 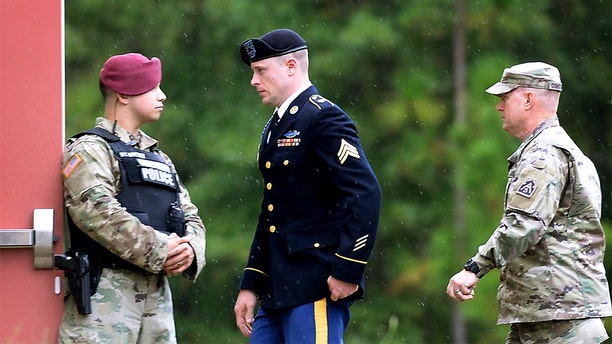 U.S. Army Sgt. Robert Bowdrie "Bowe" Bergdahl is escorted to the Ft. Bragg military courthouse following a lunch recess after pleading guilty to desertion and misbehavior before the enemy on October 16, 2017 in Fort Bragg, North Carolina. An appeals court will review his case to determine whether comments made by President Trump or others led to an unfair trial.<br> (Photo by Sara D. Davis/Getty Images)

Bergdahl was spared prison time but sentenced in November 2017 to a dishonorable discharge, a reduction in rank to private and forfeiture of $10,000 in pay.

During the proceedings, then-presidential candidate Trump blasted Bergdahl, calling him “a no-good traitor who should have been executed” for abandoning his post in Afghanistan in 2009. McCain said in 2015 that his Senate committee would hold a hearing if Bergdahl weren't punished.

Bergdahl was captured by the Taliban after leaving his base and held for five years. The Hailey, Idaho, native was swapped for five Taliban prisoners in Guantanamo Bay and brought to the U.S. in 2014 by former President Barack Obama.

Bergdahl's defense attorney, Eugene Fidell, argued that Trump's and McCain's comments were so inflammatory that Bergdahl did not receive a fair trial.

Following Bergdahl's sentencing, Trump tweeted it was a "complete and total disgrace to our country and to our military."