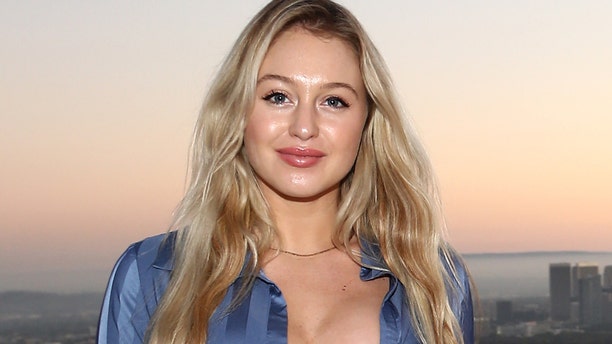 Model Iskra Lawrence debuted her baby bump this week with a video of herself nude and a series of photos. (Photo by Tommaso Boddi/Getty Images for Vital Proteins)

British model Iskra Lawrence debuted her baby bump this week with a video of herself nude and a series of photos she posted to Instagram.

The 29-year-old unveiled her growing belly to celebrate the 5-month mark of her pregnancy.

“4 months has flown by! And my belly has finally popped,” Lawrence wrote when she posted a video on Sunday. “Celebrated 20week half way (so now 5months) on this magical journey with a stunning photoshoot with my girl.”

Lawrence also shared images of her first pregnancy shoot on Tuesday to her 4.5 million Instagram followers. The body-positive model is wearing a white bra and panties while surrounded by a bevy of greenery.

“Growth,” she captioned. “@ashleyjophoto thank you for capturing my journey into motherhood and my growing bump. These images mean so much to me.”

“Oh baby! Aren’t you just the cutest mama to be?! Much love to you and [boyfriend] @philipapayne,” one Instagram follower commented.

“Awwwww you’re such a beautiful mummy to be!!! I’m so excited to watch your journey,” another person wrote.

Another follower said, “Obsessed with you!! You’re glowing!!”

Lawrence, who is expecting her first child, recently opened up about embracing her pregnancy body after struggling with body dysmorphia and an eating disorder.

In an exclusive interview with Fox News on Friday, Lawrence said she had fears that changes to her body through the pregnancy would "trigger" her past struggles with eating disorders.

"Any changes in your body that feel out of your control can trigger body image issues or reignite past eating disorders or body dysmorphia," she said. "So when I found out I was pregnant with my first, my friends from the ED [eating disorder] community asked how I was feeling with my body."

"I wondered, would I feel triggered? Would I be scared to watch my body grow?" she added.

That all changed, Lawrence said, when she settled into her pregnancy.

"I feel like my body is not just my home but it’s my baby's home, and I want to let it do whatever it needs to make sure it’s the healthiest, happiest place for them," she said. "I’m more appreciative and in awe of it than ever. But I’m also excited to share the real raw stuff as I go on this journey."