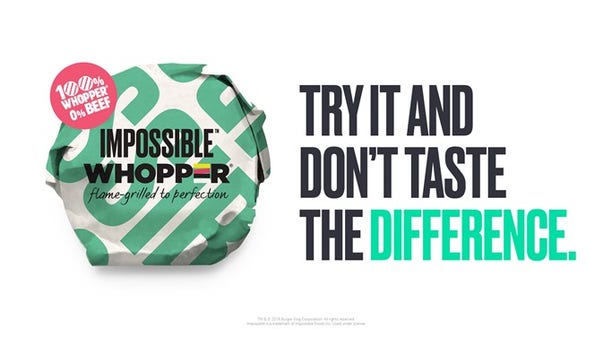 Burger King has surprised its meat-loving regulars with an “Impossible Whopper” – a plant-based version of the brand’s iconic hamburger. (Burger King)

It’s a (veggie) Whopper of an April Fool’s prank.

Burger King has surprised its meat-loving regulars with a flame-grilled “Impossible Whopper” — a plant-based version of the brand’s iconic hamburger.

The fast-food chain brought in some of its most loyal – and meat-centric – customers for the stunt, which has them unknowingly eat the Impossible version of the Whopper.

“If it’s not beef, I don’t want it” one man said, before asserting, “First bite I would know the difference between beef and whatever else you have.”

“I’ve probably eaten about two Whoppers a week for the last 20 years,” another customer claimed.

Burger King filmed the customers unknowingly tucking into the veggie burger – which boasts 0 grams of cholesterol and 17 grams of protein – before revealing there is no beef.

“It tasted just like a Whopper should taste,” another customer said.

The Impossible Whopper utilized the popular Impossible Burger patty, which is made up of soy protein, coconut oil and heme derived from plants, which gives the burger its meaty texture. Recently Impossible Foods, the company that created the savory food, released an update Impossible Burger 2.0 version to rave reviews.

The limited-release offering is only available at 59 Burger King restaurants in and around the St. Louis area. It is not reported if the chain plans on rolling out the plant-based patty to a larger market.