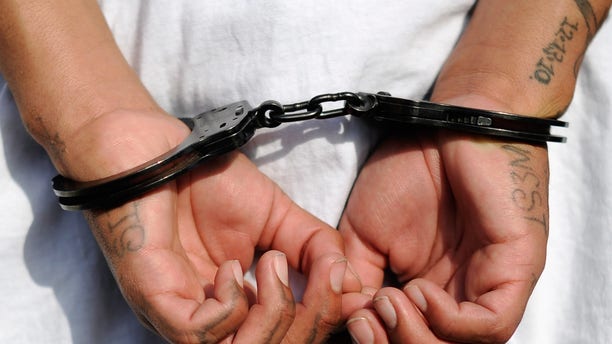 LOS ANGELES, CA - APRIL 29: Handcuffs are seen on the hands of a twenty-year old "Street Villains" gang member who was arrested by Los Angeles Police Department officers from the 77th Street division on April 29, 2012 in Los Angeles, California. The 77th Street division patrol the same neighborhood that truck driver Reginald Denny was nearly beaten to death by a group of black assailants at the intersection of Florence and Normandie Avenues. It?s been 20 years since the verdict was handed down in the Rodney King case that sparked infamous Los Angeles riots. (Photo by Kevork Djansezian/Getty Images) (2012 Getty Images)

Investigators say Junior Benjamin Rodriguez of Mission was 15 when he fled from Border Patrol agents and flipped a van he was driving in Palmview, west of McAllen. Authorities believe the van was hauling at least 17immigrants.

Rodriguez, who was charged as an adult, faced nine counts of murder. Those were reduced to manslaughter charges as a result of his guilty plea.

Sentencing was scheduled for August. He could receive two to 20 years in prison on each count, but those years would run at the same time.

Immigrants who have entered the U.S. illegally are regularly shuttled from the Rio Grande to stash houses where they are held until the next leg of their journey north is arranged. On Friday, a sport utility vehicle fleeing police in La Joya flipped, killing one woman and injuring several others. Authorities estimated there were about 15 people in the vehicle.

Two Border Patrol agents had pulled Rodriguez's van over on April 10, 2012, suspecting that immigrants were being smuggled. As an agent walked toward the van, a passenger jumped out and ran and the vehicle sped off.

By the time the agent caught up, the van had crashed outside a day care.

Six adults connected to the smuggling operation pleaded guilty to federal charges. Four have not yet been sentenced; the others were sentenced to time already served.