Canada’s easternmost province was buried under 30 inches of snow Friday – a record for the most snow in 24 hours – as residents of the provincial capital of St. Johns struggled to clear snow drifts of 12 to 15 feet high left in the wake of the storm, a published report said.

St. John’s broke the old record for snow in 24 hours as 30 inches hit Newfoundland and Labrador resulting in a slew of power outages and business closings as roadways were ordered cleared except for emergency vehicles, The Washington Post reported. Government officials called in the Canadian armed forces to help clear the inundation. 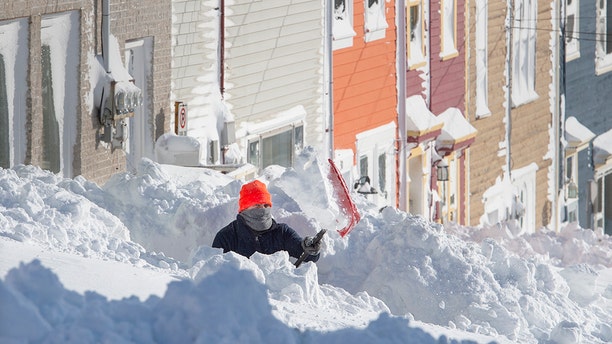 A resident digs out his walkway in St. John's Newfoundland on Saturday, Jan. 18, 2020. Andrew Vaughan/The Canadian Press via AP)

Officials said because of hurricane-level winds in the area, in some cases reaching the century mark, it was difficult to ascertain an exact amount of snow with all the blowing and drifting, the newspaper reported.

Residents awoke Saturday morning to find the snow had not only covered up their cars, but also the first floors of many homes.

Meanwhile, the storm was labeled a Canadian meteorologists as a meteorological “bomb,” having undergone a process of rapid intensification known as bombogenesis, the report said. Although short in duration, it was unusually ferocious even for an area used to powerful ocean storms during the winter - “as severe a blizzard as St. John’s metro has ever seen,” tweeted The Weather Network’s Chris Scott.

Almost 7,000 customers in the St. John’s area experienced power outages late Saturday afternoon, according to Newfoundland Power, which posted no estimated restoration time for the majority that were attributed to poor weather. On Friday evening, that number stood at 10,000 customers, the Post reported.

The Department of Transportation and Works for Newfoundland and Labrador said plow operators handled more than 100 requests for assistance Friday, including 24 from ambulances, 23 from police and 60 from the public.