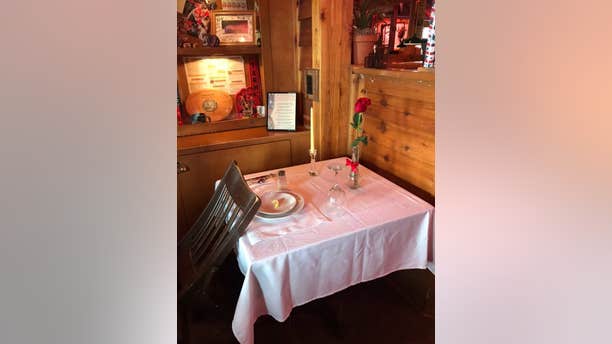 A Texas Roadhouse restaurant in Illinois is honoring McHenry County Sheriff's Deputy Jacob Keltner, who was killed in the line of duty on Thursday. (Texas Roadhouse in Rockford, Illinois)

A Texas Roadhouse restaurant in Illinois honored a fallen sheriff's deputy by setting a table for him after he was fatally shot last week.

Deputy Jacob Keltner, of the McHenry County Sheriff's Office, was killed in the line of duty on Thursday. He was trying to arrest Floyd Brown, 39, on a burglary warrant at a hotel in Rockford, but Brown allegedly shot him in the head.

The restaurant decided to honor Keltner at their location in Rockford.

"In honor of Deputy Jacob Keltner, our Fallen Hero table will remain set this way until he is laid to rest," the Roadhouse wrote on Facebook Sunday. "We send many prayers to his family friends, and colleagues."

The table includes normal plate settings, in addition to a candle and a red rose. It was unclear whether Keltner was a regular guest at the restaurant.

The Illinois state government building flew U.S. and state flags at half-staff on Tuesday in honor of Keltner, who tried to arrest Brown as part of a U.S. Marshals task force.

Keltner leaves behind a wife and two young children. Sheriff Bill Prim called the deputy a "great guy" and a "fine man." Keltner was the first officer in the department to die in the line of duty in three years, according to the sheriff.

Brown was charged with first-degree murder.