North Dakota county to vote on whether to stop accepting refugees

A county in North Dakota is set to decide Monday whether it will stop accepting refugees, potentially becoming the first since President Trump issued an executive order making it possible.

Burleigh County, home to nearly 100,000 people and the capital city of Bismarck, postponed a vote last week after more than 100 people showed up and overflowed the commission's normal meeting space.

"The overwhelming public opinion is so clear to me, that I think if you vote for it, you're not going to be reelected if you choose to run again," said Chairman Brian Bitner. 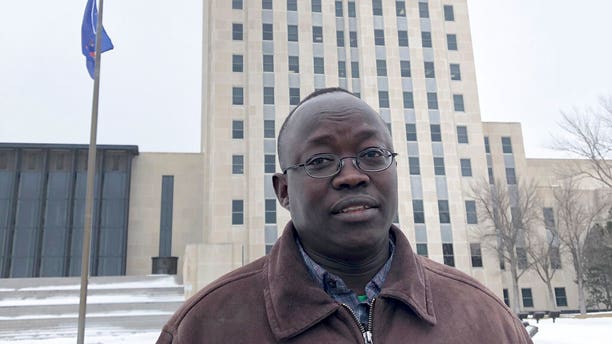 Reuben Panchol, who immigrated from Sudan to North Dakota as a child, standing in front of the North Dakota state capitol in Bismarck.  (AP)

Trump's executive order earlier this fall came after he’d proposed cutting the number of refugees next year to the lowest level since the early 1980s. He declared that refugees should be resettled only in places where state and local governments gave consent.

Since then, many governors and counties around the country have declared they would continue taking refugees. But, the idea was quickly opposed in more conservative Burleigh County. Among the opponents was Republican state Rep. Rick Becker, who took to social media to criticize the program as a possible drain on social-service programs, schools and law enforcement.

"This isn't about skin color," Becker said. "In the past, nobody had any say whatsoever. Now we have something that should have been in place decades ago."

Bismarck Mayor Steve Bakken, a Republican, said the city government had no say in the matter, but he sided with those who wanted to stop taking in more refugees.

"We have burgeoning school enrollment, veterans' needs, homeless needs and Native American needs,” he said, adding: "This isn't about heartstrings, this is about purse strings.”

Shirley Dykshoorn, a vice president for Lutheran Social Services, which has handled North Dakota's refugee resettlement cases, said her agency used to handle about 400 cases per year, but that number dropped to 124 in fiscal-year 2019.

Dykshoorn said Burleigh County had been projected to receive no more than 25 refugees annually in the coming years.

"I'm trying to understand the basis for believing how 25 people will dramatically change the fabric of a community," she said. "What does it say to the rest of the country when a county where your capital city is located would choose not to participate?"

The Lutheran Immigration and Refugee Service, which has worked with Lutheran Social Services, was one of three national organizations suing to block Trump's executive order. The group's president and CEO, Krish O'Mara Vignarajah, said her organization has closely tracked the response and was aware of no other local government that has voted to reject refugees.