Montana officials and loved ones gathered last week to rename a stretch of highway after Louis Charlo, a Marine who died in the battle of Iwo Jima and helped pave a path for one of the most iconic photographs of World War II.

Louis Charles Charlo Memorial Highway runs along U.S. Highway 93 between Markers 7 and 9, near the entrance to the Flathead Reservation, according to Montana HB 717. Charlo, a member of the Confederated Salish and Kootenai Tribes, played on the land as a child.

“I didn’t think it would ever happen, really,” Victor Charlo, Louis' younger brother, said during the Thursday dedication. “We talked about it, but that was about as far as it ever went.”

As an 18-year-old Marine private first class, Charlo was part of a small reconnaissance patrol on Feb. 23, 1945, that went up the 546-foot-high Mount Suribachi on Iwo Jima. The soldiers didn't encounter resistance and returned to their platoon to again head up to the summit.

AP WAS THERE: MARINES RAISE AMERICAN FLAG ON IWO JIMA, AS REPORTED BY AP IN 1945 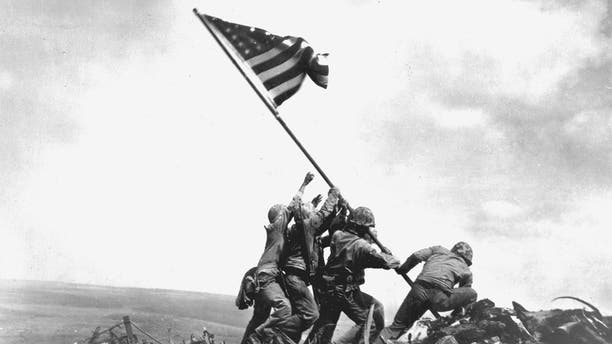 Once at the top, the platoon found a 20-foot pipe and used it to raise an American flag taken from the USS Missoula, which transported the Marines to the island. Charlo was back up the summit later that afternoon when a bigger flag was raised where he provided perimeter security.

That moment was captured by Associated Press photographer Joe Rosenthal and later immortalized as a symbol of the war.

Charlo was killed a week later while carrying wounded Marine Pvt. Ed McLaughlin on his back from a battlefield area nicknamed the Meat Grinder. Both men were killed by a Japanese sniper a few feet from safety.

Charlo's remains were returned to Montana for burial in 1948. He would have turned 93 on the day the highway was named in his honor.

Charlo was initially believed to have helped raise the first flag on Mount Suribachi, but a Marine Corps review concluded he had been misidentified, according to The Marine Corps Times. The Corps noted Charlo was a member of the reconnaissance team that led the path to the site and that he later provided security during the raising of the second flag.

Upon his death, he was awarded the Purple Heart and several other citations.

“When you look at what he did,” Charlo's nephew, state Rep. Shane Morigeau, told The Missoulian.  “carrying a man out on his back who was injured, sacrificing his life for somebody and also being a part of both those flag raisings at Iwo Jima, those landmark moments in our history and our country ... in my mind he already has a Medal of Honor.”

In 2016, Gen. Robert Neller, then commandant of the Marine Corps, said in a letter to Victor Charlo that his brother is considered a hero by branch.

"He was part of one of the most brutal battles of World War II and gave everything for his Corps and country," Neller wrote.