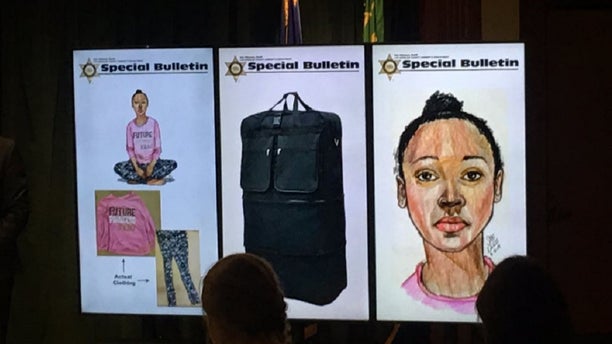 The body of a girl wearing a "Future Princess Hero" shirt was found in a duffel bag in Southern California on Tuesday morning. (LA County Sheriff's Department via Twitter)

The body of a girl wearing a pink long-sleeve "Future Princess Hero" shirt was found in a black roll-away duffel bag in Southern California this week, and authorities are seeking the public's help in identifying the victim.

The girl's head and torso were slightly protruding from the bag after the body was dumped to the bottom of an embankment along the Hacienda Heights equestrian trail, about 20 miles east of downtown Los Angeles, a report said.

“It is a suspicious-death investigation. There were no obvious signs of trauma,” Los Angeles County Sheriff’s Homicide Lt. Scott Hoglund said. “We don’t have any idea who this child is.”

Authorities estimated that she died about 48 hours prior to her body's discovery, Fox 11 Los Angeles reported. The body had been there for about 24 hours before workers for the L.A. County Parks and Recreation found it while clearing the area around 10:30 a.m. Tuesday, the Los Angeles Times reported.

The girl was also wearing gray pants with pandas on them, the station reported. She was not wearing any shoes, the report said.

The child was black, between 8 and 13 years old, about 4 feet 5 inches tall and weighing 55 pounds, the Times reported.

“It’s a sad moment for the department, for the community, and we’re going to do our best to figure out” what happened to the girl, Los Angeles County Sheriff Alex Villanueva said Wednesday, according to the Times.

Investigators are determining the identity and cause of the death of the child.

An autopsy is slated in the next few days, he said, according to the paper.

Hoglund said there were no visible signs of malnutrition or mistreatment.

“We don’t have any motive. We don’t have any reason for why this happened, or how this happened. And that’s the purpose for being here today — to get the public’s assistance and hopefully identify the victim so our investigators can head down that path,” the lieutenant said at a news conference, according to Fox 11 Los Angeles.

Dan Scott, a retired L.A. County sheriff’s sergeant who was involved in dozens of child abuse and death investigations, told the Times that the circumstances in this case are unusual.

“It is extremely rare to see a child’s body dumped,” he said. “I cannot recall one in recent years in the region.”

In April, a child's body was found inside a suitcase along train tracks in Jersey City, N.J. Eight days later, police arrested her father, Travis Lamont Plummer, in Puerto Rico and charged him with desecrating human remains. In October, autopsy results revealed the 2-year-old girl had cocaine in her system.