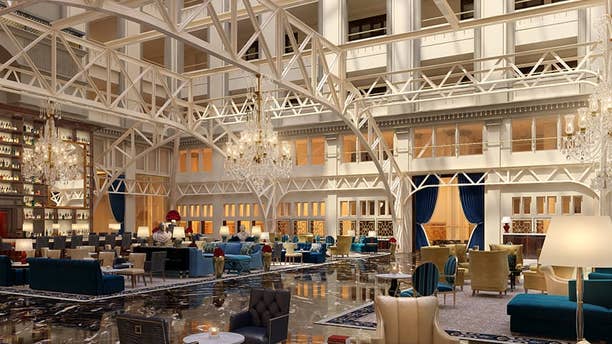 The luxury hotel Donald Trump has built-- and is still partially under construction-- in an iconic downtown Washington building opened to the public Monday.

The Trump International Hotel, Washington, D.C., will begin serving guests today. A representative for the hotel says that most of the property's 263 rooms are expected to be finished at the end of October, with grand opening ceremonies planned later that month.

According to the Trump Hotels reservation website, rooms for the soft-opening weekend start around $750 per night and go over $4,800 a night for the premier Postmaster Suite. After the soft-opening period, room mates will start around $500 a night for a "deluxe room" to $9,000 for the one-bedroom presidential suite which feature 14 to 16 foot ceilings, "soaring windows, glittering crystal sconces" and six-foot tubs.

The bi-level Trump Townhouse, which boasts two bedrooms, an office, workout room and dining room that seats 24, is available for the week of the Presidential inauguration at a rate of $100,000 per night, with a five night minimum stay. But if you can't make it to D.C. in January, the regular rate for the two-bedroom townhouse is $18,750.

Trump broke ground on the renovation before he entered the presidential race, boasting that it would be one of the finest hotels in the world. After he launched his campaign, two highly regarded chefs backed out of plans to open restaurants in the hotel because of Trump's comments about Mexican immigrants.

The Trump Organization won a 60-year lease from the federal government to transform the historic Old Post Office building on Pennsylvania Avenue into a hotel. In addition to a lobby bar, the hotel features a BLT Prime restaurant and a Starbucks.