A Chinese theme park is getting substantial international backlash after a pig was tied up and forced to bungee jump from a 220-foot-plus platform as part of a publicity stunt for the park’s newest attraction.

Video footage taken at Meixin Red Wine Town theme park in Chongqing shows the pig wearing a cape and being pushed off the 223-foot-high tower while its front and back feet are bound. The 165-pound pig’s squeals can reportedly be heard as it bungees up and down over a body of water below. In other videos, outlets have claimed onlookers can be heard cheering and laughing. 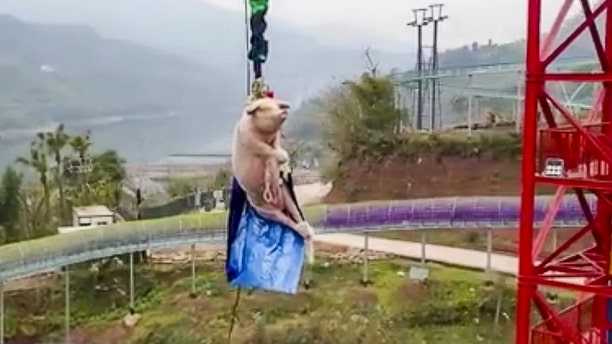 The stunt was reportedly to celebrate the opening of the new bungee jump attraction at the theme park. (Meixin Red Wine Town theme park)

Additional footage shared by China's The Paper shows workers hauling the pig up to the top of the platform, and recovering it afterward. (Warning: The clip contains footage some viewers may find difficult to watch.)

The pig was transported to a slaughterhouse following the stunt, BBC reported.

The stunt was reportedly staged to celebrate the opening of the new bungee jump attraction at the theme park.

Once the video was shared on social media, the theme park faced swift backlash and criticism for its treatment of the animal.

“What kind of country in 2020 has absolutely no animal rights at all. Sick f---ers — filming a pig squeal in fear until it passes out,” one woman tweeted.

"This is cruelty to animals at its worst. A bungee jump is a scary experience even for consenting humans—just imagine the outright terror of being forcibly strung up by your legs and thrown from a high platform. That's the treatment that this pig received, all for a cheap laugh. Well, guess what? No one's laughing.

"Pigs experience pain and fear, just as we do, and this kind of disgusting PR stunt should be illegal. The theme park deserves every shred of the backlash it's receiving online, and the Chinese public's angry response should be a wake-up call to China's policymakers that they must implement animal protection laws immediately," the statement read.

The theme park later issued an apology for its marketing ploy, BBC reported.

"We sincerely accept netizens' criticism and advice and apologize to the public," the statement read. "We will improve [our] marketing of the tourist site, to provide tourists with better services."