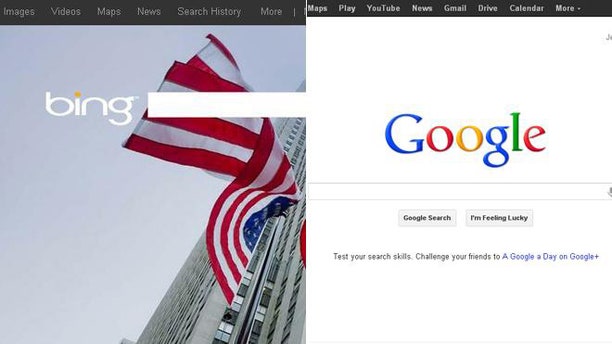 June 14 is Flag Day, a national holiday celebrating the Stars and Stripes since 1949. But don’t ask Google about it.

The search giant is known for its colorful, interactive logos for everything from the 78th birthday of the inventor of the Moog synthesizer to Earth Day to the anniversary of Pac-Man. But for Flag Day, the company was presenting visitors with nothing but its usual site, declining to play up the red and blue in its logo.

Even Google users noticed the omission.

"You create elaborate doodle's for random holidays like when the Ferris wheel was created, but Memorial Day and Flag Day are totally disregarded," wrote one user on Google's message boards. "Memorial Day at least got a little baby Flag with a ribbon at the bottom of the page. But today, there's nothing?"

Meanwhile, Microsoft fully embraced the national holiday, with a colorful background that shows Old Glory in all its glory: a colorful display of fluttering flags against the backdrop of Rockefeller Center.

Bing’s homepage carries boxes that allow the curious websurfer to find out more about whatever holiday, event, thing or whatever the page is highlighting. In this case, facts about both the Rockefeller Center setting and the Flag Day event that prompted the picture.

“After the United States gained independence, it took nearly one whole year to decide on the first design for our country’s flag,” Bing notes. “It’s changed over the years, but don’t you think we ended up with a grand one?”

The last few words are linked to a search page with information on Flag Day.

On Tuesday, Google did highlight national pride, however: a doodle presented on some local versions of the site honored Russia Day. June 12 was also highlighted regionally as Independence Day in the Philippines.

Flag Day, not so much.