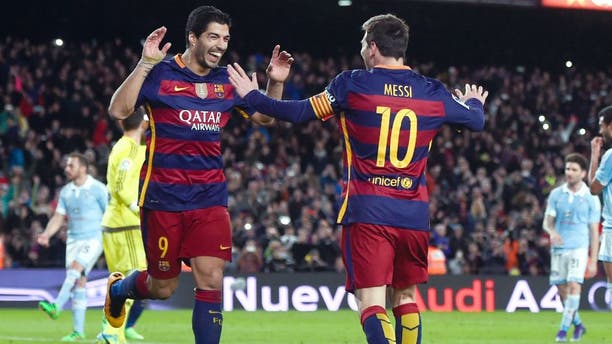 BARCELONA, SPAIN - FEBRUARY 14: (L-R) Luis Suarez of FC Barcelona celebrates with his team mate Lionel Messi of FC Barcelona after scoring his team's fourth goal from the penalty spot during the La Liga match between FC Barcelona and Celta Vigo at Camp Nou on February 14, 2016 in Barcelona, Spain. (Photo by David Ramos/Getty Images)

The Argentine has been criticized by some for a lack of respect in passing from the penalty spot to allow his team-mate to complete a hat-trick as Celta Vigo were thrashed 6-1 at the weekend.

One leading pundit in Ireland insisted the move "lacked class" and described it as "bolloxology"but Cruyff, who pulled off the same move in 1982 when playing for Ajax, dismissed all criticism.

"Football is for fun and Messi gives fun to all," Cruyff told Sport. "I was very happy [with the penalty]. I share ideas with players who dare to do this kind of thing."

Cruyff added that Messi was trying to entertain, not provoke, with the piece of quick thinking that "could not be faulted".

Messi has since been petitioned by Barcelona fans to assist Javier Mascherano from the penalty spot, with the fellow Argentine yet to score for the club since arriving in 2010 and making 264 appearances.