Family finds $300,000 of gold treasure off coast of Florida 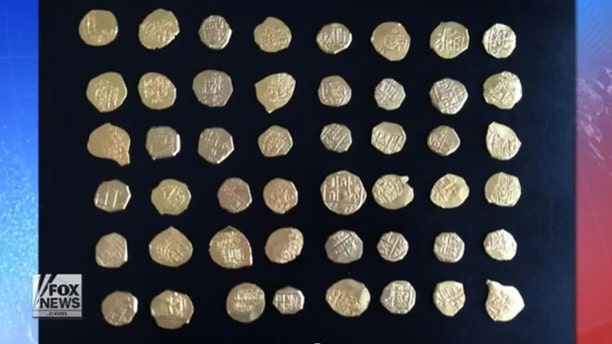 Gold coins discovered in mid-July from the same 1715 ship wreckage off the coast of Florida. (FoxNews/MrUltimateNews)

A Florida treasure-hunting family struck it rich over the weekend when they discovered an estimated $300,000 worth of gold coins and chains off the coast of Fort Pierce.

"This is like the end of a dream" Rick Schmitt who found the sunken treasure with his family and fellow diver Dale Zeak told the Sun-Sentinel.com.

Schmitt and wife Lisa along with their grown children Hillary and Eric uncovered the treasure 150 yards offshore which includes 64 feet of thin gold chains, five gold coins and a gold ring.

"What's really neat about them [Schmitt family] is they are a family, they spend family time together out there and the most amazing part about them is they always believed this day would come," Brent Brisben whose company 1715 Fleet - Queens Jewels LLC owns the rights to the wreckage told Reuters.

The treasure found by the Schmitts comes from the wreckage of a convoy of 11 ships that were destroyed in a hurricane off the coast of Florida in 1715 while en route from Havana to Spain. The 1977 film "The Deep" and the 2008 "Fool's Gold" film were based off of the 1715 wreckage.

According to the ships' manifests, $400 million worth of treasure was on board and so far only $175 million has been found, Brisben said.

Brisben's company bought the rights to the wreck site from legendary treasure hunter Mel Fisher in 2010. He allows others to search for gold under subcontracting agreements.

The Schmitts have been searching for treasure for years and before discovering the gold, a 2002 haul included a $25,000 silver platter. This is also not the first find for Brisben who found 51 gold coins in July worth around $250,000.

In accordance with U.S. and Florida law, the treasure will be taken into custody by the U.S. District Court in South Florida. The state of Florida will then be allowed to possess up to 20 percent of the find to put on display in a state-run museum. The remainder of the gold will be split evenly between Brisben's company and the Schmitt family.