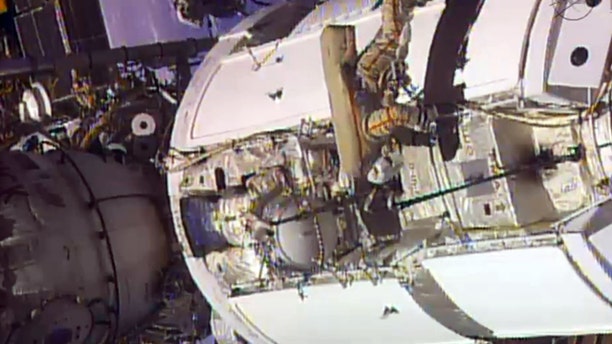 NASA said Wednesday it was investigating a potentially serious problem with a malfunctioning cooling pump on the International Space Station, but  there was no immediate danger to the six crewmen on board.

“Earlier Wednesday, the pump module on one of the space station’s two external cooling loops automatically shut down when it reached pre-set temperature levels,” a NASA statement said. “The flight control teams worked to get the cooling loop back up and running, and they suspect a flow control valve actually inside the pump itself might not be functioning correctly.”

The statement said the crew was not at risk but some non-critical equipment aboard the massive orbital outpost was powered down.

"It could be a serious problem, but it's not an emergency," Johnson Space Center spokesman Kelly Humphries said.

NASA spokesman Josh Byerly told Reuters that the repairs may require a spacewalk, but that was not certain.

"If it's a software problem, they could just do a software update or do a patch. If it's a hardware issue, that's something else," Byerly said. "We'll know more in the next day or so."

Engineers suspect a valve inside the pump was faulty and ground controllers moved electrical power supplies to the other cooling loop, NASA spokesman Bob Jacobs said. These loops circulate ammonia outside the station to keep equipment inside and outside cool.

The crew was reported to be preparing to begin a normal sleep shift while experts on the ground collect more data and consider what troubleshooting activities may be needed.

The station commander is cosmonaut Oleg Kotov. Americans Rick Mastracchio and Michael Hopkins, Russians Mikhail Tyurin and Sergey Ryazanaskiy, and Japanese astronaut Koichi Wakata are aboard. The orbital outpost, the size of a football field and weighing nearly 1 million pounds, has been in orbit more than 220 miles above Earth since 1998.