Are archaeologists close to finding the Alamo's main gate? 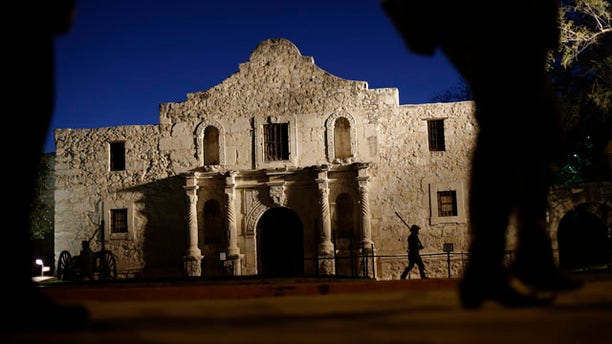 File - In this March 6, 2013, file photo, Dan Phillips, a member of the San Antonio Living History Association, patrols the Alamo during a pre-dawn memorial ceremony to remember the 1836 Battle of the Alamo and those who fell on both sides. (AP Photo/Eric Gay, File)

Archaeologists digging at the Alamo may be close to locating the site of the historic compound’s main gate.

Experts discovered stones beneath San Antonio’s Alamo Plaza last week that could be associated with the main gate of the 18th century Mision San Antonio de Valero, as the Alamo Mission was originally known.

The stones are near the possible site of the Alamo’s south wall and gate, according to Nesta Anderson, the dig’s lead investigator and senior archaeologist at Pape-Dawson Engineers.

"They are in the right place, so we're hopeful that that is associated with the gate," she said. "This would have been the entrance to the Alamo - all the traffic into the walled enclosure would have come through that gate, from the south."

The location of the famous battle of the Alamo in 1836, the site was first established as a Spanish mission in 1744. Experts are trying to locate the compound’s original walls and gain insight into the site’s Spanish colonial history as part of a major excavation project that began July 20.

Archaeologists are now focusing their efforts at the dig site on the east side of Alamo Street, on the south side of Alamo Plaza.

“We’re busy trying to get some of the features exposed so that we can gather whether or not we’re in the right place,” explained project archaeologist Kristi Miller Nichols of engineering consulting firm Raba Kistner, during a press conference Monday. “We’re still trying to confirm if this is [a] portion of the south wall near the Alamo south gate.”

“We’re doing some research now, back at the office, as well as trying to interpret what we’re seeing out here,” Miller Nichols added. “There are several different maps to look at – there’s lots of different interpretations as to where the south gate is.”

The four-week dig is part of ‘Reimagine the Alamo,’ a project to develop a new master plan for the site and its surrounding area.

Miller Nichols said Monday that experts are digging up to three feet below the surface of Alamo Plaza.

“We may be in the area of the south gate, if we are, we’re just going to have to figure out if we’re a little bit to the west of it or if we’re right on dead center,” she added.

The stones would likely have been used as the foundation "footer" for an adobe wall, a feature typical of Spanish colonial architecture.

On July 22 archaeologists discovered an adobe wall at another location beneath Alamo Plaza near where historians think the west wall of the complex was built.