Obama to business owners: 'You didn't build that' 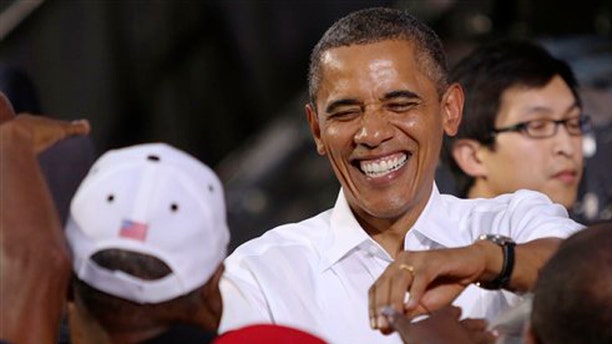 President Obama, in a speech to supporters, suggested business owners owe their success to government investment in infrastructure and other projects -- saying “if you’ve got a business, you didn’t build that.”
Obama’s comment Friday during a campaign stop in Roanoke, Va., came just days after he urged Congress to extend tax cuts enacted during the Bush administration only to families earning less than $250,000 annually -- part of his argument that top earners have an obligation to pay more to trim the deficit.

“If you were successful, somebody along the line gave you some help. There was a great teacher somewhere in your life. Somebody helped to create this unbelievable American system that we have that allowed you to thrive. Somebody invested in roads and bridges. If you’ve got a business, you didn’t build that. Somebody else made that happen,” he said. “The Internet didn’t get invented on its own. Government research created the Internet so that all the companies could make money off the Internet.”

Senate Majority Leader Harry Reid, D-Nevada, has pledged a vote on the Obama plan before Congress’ August recess, but whether he has the votes remains unclear. A handful of Democrats – include several facing a tough re-election bid – don’t want to vote on a proposal that would result in a tax increase for some Americans.

Senate Democrats and Republicans wrangled Wednesday over the tax cut extensions, which have emerged as a major campaign issue as GOP candidate Mitt Romney attempts to upend Obama’s re-election bid.

Leaders of the GOP-controlled House want to extend the cuts for all Americans and will almost assuredly reject any plan capping them at the $250,000 income level, or $200,000 for individuals.

The cuts will expire in January.