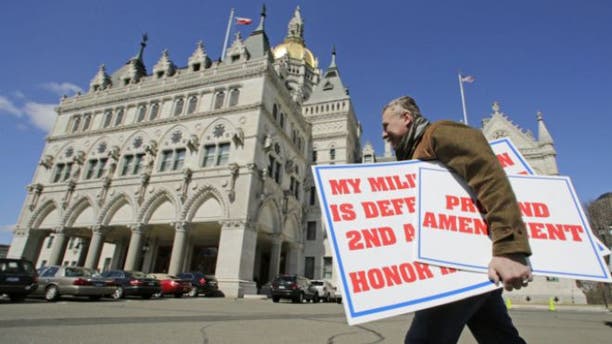 April 3, 2013: Jody Winslow, of Farmington, Conn., carries signs regarding the second amendment of the U.S. Constitution as he heads back to the Capitol in Hartford, Conn. (AP)

The National Shooting Sports Foundation Inc., which is based a few miles from Sandy Hook, claims the emergency legislation was illegally passed in April without proper public input, time for adequate review by members of the General Assembly, or a statement of facts explaining why lawmakers needed to bypass the usual legislative process.

The lawsuit argues that the law violates group members' rights to bear arms under the Second Amendment and a provision of the Connecticut Constitution that provides citizens with the right to defend themselves, The Hartford Courant reported.

"This is an action to vindicate the rights of the citizens of Connecticut whose federal and state constitutional rights have been adversely affected and significantly restricted by the passage of [the bill] through an abuse of the 'emergency certification' procedure, circumvention of the normal legislative process, and violation of Connecticut statutory law," the lawsuit states, according to The Courant.

"There was no emergency and so there's no statement of facts as to why this is an emergency," Lawrence G. Keane, the foundation's senior vice president and general counsel, told The Associated Press, arguing the public's federal and state constitutional due process rights were therefore violated. "There was truly no emergency other than a political one."

Keane said the foundation wants a U.S. District Court judge to strike down the law as invalid, prohibiting it from being enforced. Many parts of the legislation have already taken effect, such as an expanded ban on guns considered to be assault weapons and a ban on large-capacity ammunition magazines.

"The correct, legally required process was not followed," Keane said.

Susan Kinsman, a spokeswoman for Attorney General George Jepsen, said the office had not yet been served with the complaint as of Monday afternoon and therefore could not comment.

Connecticut's bill originally stemmed from a legislative task force charged with reviewing the state's gun laws, mental health care and school security following the Dec. 14 school shooting that left 20 first graders and six educators dead. Those recommendations were passed on to the top leaders of the General Assembly, both Democrats and Republicans, who ultimately crafted a compromise bill behind closed doors that was presented to the rank-and-file lawmakers on April 1.

The final bipartisan, 139-page bill — designated as "emergency certified" and therefore bypassing public hearings and committee votes — received final legislative approval early April 4. It passed 26-10 in the Senate and 105-44 in the House of Representatives. Both were bipartisan votes. Gov. Dannel Malloy, a Democrat, signed the bill into law the same day.

Malloy, House Speaker Brendan Sharkey, Senate President Donald Williams Jr., and other state officials are named as the defendants in the lawsuit, which is the third challenge to the state's new gun law but the first to accuse the legislature and governor of violating the law in order to pass it.

In March, a group of Connecticut organizations that support gun rights, pistol permit holders and gun sellers filed a lawsuit claiming, among other things, the assault weapons and large-capacity magazine bans violate their rights to bear arms and to equal protection under the law. A month earlier, a New London resident filed a suit on behalf of the Disabled Americans for Firearms Rights, arguing the new law infringes on the rights of people with disabilities to protect themselves.

Jepsen said in March that his office believes the legislation, considered among the strictest in the nation, is lawful and that his office was prepared to defend it against any court challenges.

The National Shooting Sports Foundation is a nonprofit entity that represents the interests of more than 9,500 federally licensed firearms manufacturers, distributors and retailers, as well as companies that manufacture, distribute and sell shooting and hunting-related goods and services. The foundation also represents sportsmen's associations, gun clubs and shooting ranges.