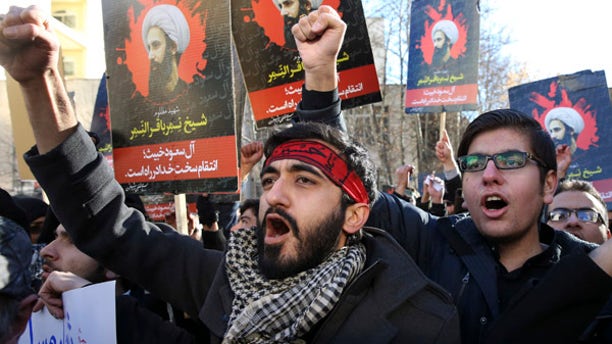 Iranian demonstrators chant slogans during a protest denouncing the execution of Sheikh Nimr al-Nimr, a prominent opposition Shiite cleric in Saudi Arabia, seen in posters, in front of the Saudi Embassy, in Tehran, Sunday, Jan. 3, 2016. Saudi Arabia announced the execution of al-Nimr on Saturday along with 46 others. His execution drew condemnation from Shiites across the region. (AP Photo/Vahid Salemi)

Saudi Arabia's execution of Shia cleric Nimr al-Nimr on charges of terrorism exposes both the fragility and the brutality of the Saudi regime.  The Shia represent only about 15% of Saudi Arabia’s population and they feel persecuted by the dominant fundamentalist Sunni regime.  They are increasingly speaking out and protesting, as was the recently executed Shia Sheikh, but unlike in Yemen or Lebanon, Saudi Shia have for the most part not taken up arms.  As with the House of Saud's pandering to Sunni fundamentalist Wahhabi clerics, repressing Saudi Shia may shore up their domestic power in the short-run, but it is likely to backfire over the longer run, undermining both Saudi and U.S. national interests in the process.

Saudi Arabia is surrounded by other Arab states with substantial Shia populations, including Iraq (80%), Bahrain (37%), Yemen (45%), Syria (13%), and Lebanon (30 %).  While these Arab Shia are not Iran's puppets, they have increasingly found common cause with their Persian brothers.  Repressing Arab Shia can only push them further into to Tehran's open arms. Recall that Saddam Hussein's brutal suppression of the majority Shia in Iraq set the stage for a major geopolitical shift in the Persian Gulf once we toppled his regime.  It is unlikely that Shia minorities in Saudi Arabia, Bahrain, and Yemen can take power in those states but they can destabilize them, as Hezbollah has long done in Lebanon.

Of course, King Salman and his many princely brothers are hardly the only U.S. allies to bungle relations with Arab Shia.  It was Israel, our closest ally and the only democracy in the region, which first ignited the Shia firestorm in the Arab world.  Under the pre-text of a Palestinian terrorist attack, Israel invaded South Lebanon in 1982 to drive out the Palestine Liberation Organization.  Chafing under Palestinian occupation, the Lebanese Shia at first welcomed the PLO’s ouster.  But as liberation turned into protracted Israeli and Lebanese Christian occupation, it destroyed the moderate Shia movement Amal and gave birth to the radical Hezbollah, with which Israel has had to contend ever since.

The United States itself has also been maladroit in its dealings with Arab Shia.  Whether with our ill-fated intervention in Lebanon to try to fix the hash the Israelis had made of it which resulted in the deaths of 241 Marines in 1983 or our naïve faith that once we overthrew Saddam Hussein’s minority Sunni dictatorship Iraq would quickly become a stable, multi-confessional, democracy, we have also shown a lack of understanding of the political dynamics of Arab Shia politics.

Today, American politicians try to out-do each other in finding Iranian perfidy in every bad development in the region rather than asking whether we and our allies are also part of the problem.  Excoriating the Obama Administration and former Secretary of State Hillary Clinton’s Middle East policies as naïve or worse, Republican front-runner Donald Trump recently complained that "Iran wants to take over Saudi Arabia. They always have.”

Whether that lofty ambition really drives the mullah’s in Tehran, and if it did whether they could even pull it off; America and its allies like Saudi Arabia are also doing a lot to inflame and mobilize the Shia crescent in a way that threatens all of us. With bungling allies like the House of Saud, Iran needs to do very little to undermine U.S. interests in this vital region.   Recent developments in Saudi Arabia call into the question whether our strategy of depending upon the Sunni monarchy as a central pillar in our security architecture in the Persian Gulf is literally and figuratively built on sand.