Cafe apologizes for calling child 'terrifying' on receipt: 'You lost some regulars today'

A woman in New Zealand says that she and her young family won’t soon return to a café where they were once “regulars," as she recently discovered that an employee described them as the “fam with the terrifying kid” on their receipt.

On Saturday, Kim Sze ordered breakfast for her family at the Christchurch location of local chain Coffee Supreme, and was shocked by the note on the bill. At the top of the $64.50 receipt for the dine-in order, the Sze clan was identified as the "fam with the terrifying kid,” a dig reportedly directed little Micah, age 2, according to New Zealand outlet Stuff Limited.

She and her family left the restaurant, and the furious parent took to Facebook the same day to call out the coffee shop.

Sze pointed out that her 2-year-old daughter was well-behaved during the outing when calling out Coffee Supreme on social media, prompting management for the coffee shop to apologize both personally and publicly for the incident.

“Hey Coffee Supreme NZ you might want to train your staff at Coffee Supreme Welles Street a little better. Writing 'family with the terrifying kid' on our ticket AND intentionally overcharging us... nice one,” she wrote online.

“We come almost every weekend and my daughter is nothing but polite and friendly and we’ve never left a mess,” she continued. “She’s never been a terror, never had a meltdown, never caused any problems and the same people working today always comment on how cute and sweet she is.”

“We just walked out before even getting our food because this is some disrespectful bulls---. We showed one of your staff the ticket and said we didn’t appreciate it and he didn’t say a word,” Sze said. “You lost some regulars today.”

In an updated message, the woman shared that she had received “a couple phone calls” from management for Coffee Supreme, describing their response to her complaint as “awesome.”

Doubling down on the apology, the coffee chain’s food and beverage manager Tim Norriss even made the long trip from Wellington to Christchurch to meet with Sze in person and apologize.

"It's totally below the standard we set for anybody in the company, so we sincerely apologize to her family," Norriss told the New Zealand Herald. "It's not something we accept as a past of hospitality at Supreme, it's extremely disappointing but we are going to do everything we can to make it right.”

Sze was offered a full refund for the meal gone wrong, and the worker who wrote the note has been placed on leave for the time being, Norriss said.

A spokesperson for the chain also apologized on social media.

“We made a mistake over the weekend and offended a customer — a young family out trying to enjoy a moment of normality. We are incredibly sorry and wish to apologize publicly,” a rep wrote on Facebook on Nov. 3. “If you’re the parent of young children, we know how it is and would like to shout you and your wee one a coffee and fluffy [a frothed milk drink with chocolate] at Customs or Coffee Supreme Welles Street — they’re on us from tomorrow through to the end of Sunday. We love fluffies too.”

Moving forward, Sze said she still feels a bit frazzled by the upsetting turn of events, describing the experience as an unfortunately typical ordeal that many young families often weather when dining out in public.

"The bigger issue for me is that as a young family, I have a 2-year-old and a 10-month-old, even though we go out a lot I still find it difficult to take my kids out. I'm always thinking, 'are people staring at us? Are my kids too loud? Are they being disruptive?’” she told Stuff Limited. "Are they doing this to other people? That could make someone who barely gets out of the house with their kids, because they have so much anxiety, just never want to leave the house again.”

Sze acknowledged, however, that Norriss was “very upset” by the rude receipt and that she appreciated Coffee Supreme’s quick response. 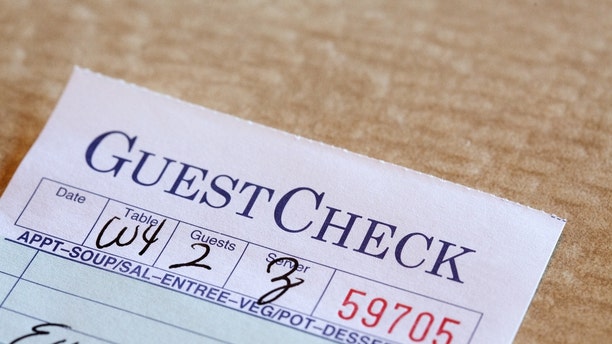 A spokesperson for Coffee Supreme was not immediately available to offer further comment on the incident. (iStock)

"I can see the culture that they have as a company, the shared values of hospitality and inclusivity and creating a positive culture and this one thing that's happened is not a representation of their company,” she said.

More broadly, Norriss emphasized that all are welcome at the cafes, especially families.

"We really love families coming into our spaces, we want everyone to feel comfortable, and we're incredibly disappointed that something like this has happened," he said.

A spokesperson for Coffee Supreme was not immediately available to offer further comment.

The coffee shop also has locations in Wellington, New Zealand, Brisbane and Melbourne, Australia, and Tokyo.