The world leaders, played by Paul Rudd, Jimmy Fallon and James Corden, reenacted the hot mic moment from last week’s NATO summit when Trudeau got caught making fun of Trump’s impromptu news conference before a photo op – with all the gossipy goodness of high school. 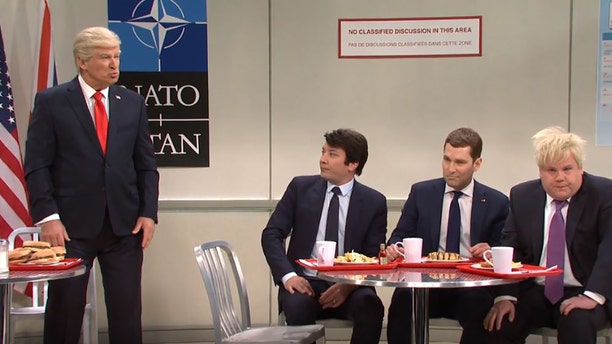 As "cool guys" sit down for lunch, Trudeau tells one of their fellow NATO leaders sitting at their table, “Romania, scram!”

“Sorry,” Romania’s leader answers as he gets up. “I love your economies.”

The three leaders then gossip shamelessly about Alec Baldwin’s Trump who they refuse to let sit with them.

“He’s not good looking like us three,” Corden’s Johnson deadpans.

The three then tell Trump to sit with Latvia at what Trump later dubs the “loser table.”

After the boys blow off Trump for Kate McKinnon’s eager-to-be-a-cool-kid German President Angela Merkel, and stick an “Impeach me” sign to his back, Trump finally gets the nerve to stand up for himself and call them “jerks” who are “two-faced.”

The sketch closes with first lady Melania Trump revealing the reenactment was merely a public-service announcement against bullying, reminding European NATO Leaders to “Be Best.”

The episode was hosted by Jennifer Lopez with musical guest DaBaby.