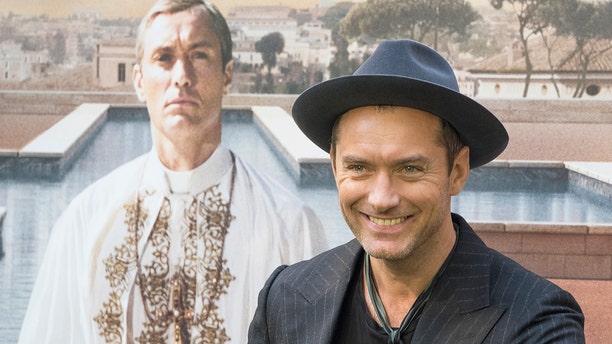 Actor Jude Law attends the 'The Young Pope' photocall at the Italian Embassy to Spain on October 11, 2016 in Madrid, Spain. (Photo by Oscar Gonzalez/NurPhoto via Getty Images)

Photos of actor Jude Law on a beach in tighty-whities sent some hearts aflutter while filming scenes in Italy for his upcoming HBO series, “The New Pope.”

Law, 46, showed off his washboard abs as he walked along the sand in Venice, holding the hand of French co-star Ludivine Sagnier, The Sun reported. At one point, he strolled past a group of women tossing volleyballs above him, presumably for a scene.

The show is a follow-up to the 2016 series “The Young Pope,” in which Law played Lenny Belardo, who later becomes fictional Pope Pius XIII, the first American to hold the position, according to the paper. The series premieres later this year.

His skimpy beach attire was welcomed online by adoring fans.

"I love Twitter because sometimes I get on here and find relevant news articles and other times its pictures of Jude Law in his underwear and I’m very thankful for both," one Twitter user wrote.

"Still trying to string my words out into something coherent after these #NudeJude pics Jude Law - #youngpope," tweeted another.

Others reminded themselves that the actor is in his mid-40s.