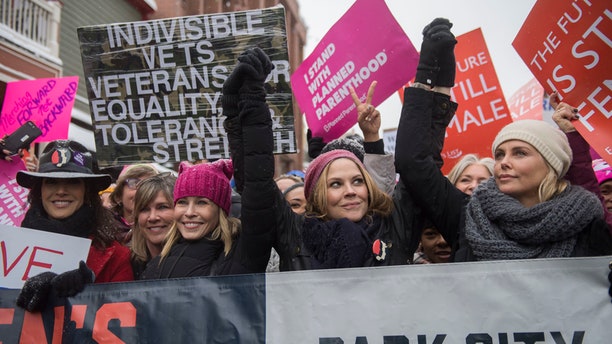 Celebrities at the annual Sundance Festival in Utah panned President Donald Trump's inaugural day performance with a rally and march on Saturday.

The Women's March on Main led by comedian Chelsea Handler included a handful of Hollywood royalty marching down Main Street in Park City.

Oscar winner Charlize Theron along with actresses Maria Bello, Mary McCormack, and Kristen Stewart were just a handful of high-profile celebs who participated in one of the 200 sister marches across the country. Actors Kevin Bacon, Benjamin Bratt and singer John Legend were also in attendance.

As the snow came falling down thousands of marchers chanting "Love not hate makes America great" and "Love Trumps hate" with signs from Planned Parenthood and stickers with the saying "I'm with Meryl" – in reference to actress Meryl Streep and her speech at the Golden Globe awards earlier this month.

Handler took the stage as the crowd cheered continuing to chant going wild. The comedian and activist shared a message of hope in her opening speech.

"We did experience a huge setback but the only thing you can do when you have a setback is to step forward and continue to fight and use your voice," she said. "And if there is a silver lining to be found regarding this past election it is that it opened our eyes to the amount of work that still needs to be done."

Teri Orr, journalist for the Park Record Newspaper and executive director of the Park City Institute, introduced Handler and spoke to FOX411 before the rally.

The march was not affiliated with Robert Redford’s annual film festival.

Stewart was among the crowd with her friends wearing an "I'm with Meryl" sticker. She declined to talk to FOX411.

"I was going to go to Sundance to support John tomorrow but feeling compelled to support my fellow women," she tweeted. "See you at the women's march, DC."