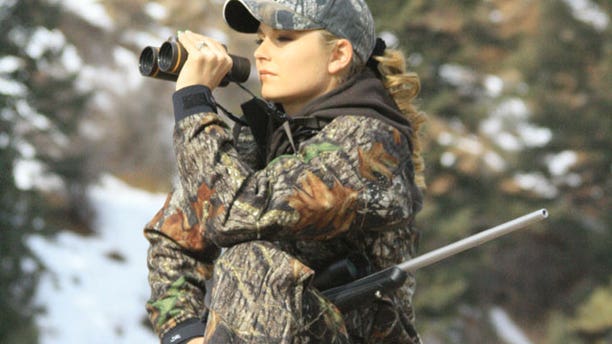 Kristy Lee Cook, a former American Idol contestant, is starring in a new reality show that showcases her love for a good, old-fashioned American hunt.

“Goin Country,” which began its eight episode run this weekend, follows the singer trying to land a record deal as she participates in hunts across the country. A spokesperson for the animal rights organization released the following statement to FOX411.com.

“Instead of angering thousands of would-be fans by killing helpless animals on camera in attempt to get her '15 Minutes of Shame,' Kristy Lee Cook's fame crusade would be better served by following in the footsteps of fellow Idol alum-turned-country-stars  Carrie Underwood and Kellie Pickler—as well as  Simon Cowell—all of whom have used their fame and talent to speak up for animals.”

Underwood is a vegetarian, Pickler has spoken out about only wearing fake fur and former judge Simon Cowell is an advocate for animal adoption.

Cook shot back at PETA, defending herself and the thousands of Americans who hunt.

SLIDESHOW: STARS WHO STRIP FOR PETA.

"Given that hunters have done more for American wildlife conservation than any other group in history, I make no apology for being one," Cook told FOX411.com. "Indeed, I join the ranks of millions of American hunters who celebrate our outdoor heritage and who conserve millions of acres of wild lands. These same people support more than 600,000 jobs across the country and provide a critical voice to encourage more investment in American conservation."

Cook’s show on the sporting network Versus follows the "Idol" finalist as she brings friends and family on various hunting expeditions. Cook told FOX411.com on Monday that she could understand people who oppose her decision to hunt, but that through the course of her show, she has taken several non-hunters out with her and changed their minds, including her own sister.

“My sister had never hunted. She once hit a butterfly with a tennis racket and cried so I was like, this is gonna be funny. We took her hunting for her first deer, with the meat going to an orphanage, and she ended up harvesting a buck. She had a great time and said she would do it again,” Cook said. “ Everybody that has experienced it for the first time has enjoyed it and had a great time. It’s more about being with friends and family and having a good time.”

Cook is also an advocate of eating organically, and argues that harvesting your own meat is about as organic as you can get.

“I’m a big time organic person, and the meat we get from shooting something is as organic as it comes. If I don’t take the meat home to my family then we give it to orphanages or homeless shelters," she said.  The meat is going somewhere and it is great because I get to feed all these people. Whether you like hunting or not, I know I get to help people eat.”

The show also highlights Cook's work with the “Kristy Lee Horse Heaven Foundation”, a charity for rescuing horses. The foundation purchases horses that have been abused or neglected.

“The show is serious about our hunt, but it also has my rescue horses in it," Cook said. "Spotlighting them is really important to me.”