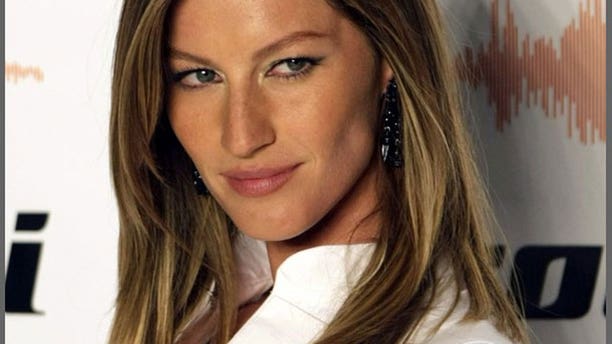 The supermodel is studying to get her helicopter pilot's license. She's passed her written test and is scheduled to take her practical exam in the coming weeks. So she's trying to cram in enough flying hours before her little bundle of joy arrives (she's currently eight months pregnant). Seems the baby bump gets in the way of the rudder, which makes controlling the aircraft a bit difficult, but Gisele is determined to complete her studies.

The former Victoria's Secret angel is not the first celebrity to earn her wings. Check out these other stars who have a license to fly the friendly skies.

Tom Cruise got his private pilot's license in 1994, and flying is a skill he began to acquire while playing Pete "Maverick" Mitchell in the Navy fighter weapons school film "Top Gun." While in real life, Cruise would've been too small to qualify to be a Navy pilot (at 5' 7" he's one inch too short), he has bought several military aircraft.

Most recently, he purchased a World War II P-51 Mustang fighter plane and had "Kiss Me, Kate" written on the side. He told People magazine that as a kid he carried a picture of a P-51 around with him. Guess dreams really do come true. Eco-lobbyists have nicknamed the actor "Emissions Impossible," as the Cruises have four planes now that they allegedly use like family minivans, shuttling kids around the world, going on monthly shopping sprees, and popping in on the latest fashion shows. It's been said that Tom's even used the jet to pick up groceries, a rumor he hasn't denied.

John Travolta is surely more public about his love of flying than any other celebrity. He's often photographed with one of his five planes, and his collection includes a Boeing 707 commercial craft (bearing the Qantas logo because the actor is a goodwill ambassador for the airline). He takes his love of aviation one step further by bringing it home each night. His residence has a 1.4-mile landing strip ending at the main entrance. A "carport" right out front houses his smaller plane for quick jaunts. The mid-century dwelling, shaped like the top of an air control tower, seems a little more like an airport than a humble abode, with its 15-by-17-foot dining-room mural of an airport scene from a 1937 "Fortune" magazine ad and its 18-foot wall-to-wall living-room windows overlooking the tarmac and fleet of planes. We're not sure how many cars fit in the actual garage, but we're pretty sure that John and Kelly don't use those very often.

Always a trendsetter, Clint Eastwood has been a licensed pilot for more than 30 years. He told Ellen DeGeneres last season that flying helicopters is his favorite hobby because, "You're the only one up there." In a 1997 "60 Minutes" interview, he took Steve Kroft up in his helicopter and flew him over the golf course he was building in Monterey, California. He told Steve that he loves flying because pilots are identified only by the code on the aircraft. "You're just a number in the sky. Everybody pretty much leaves you alone. Charlie Xray or 71Romeo Papa. Every plane is just an ID." Seems like Clint needs some alone time.

Angelina Jolie got her pilot's license five years ago and then did an interview with Vogue in which she hopped in the plane while wearing a tight designer skirt, Gucci shades, and high heels. Once inside, she hiked up the skirt and kicked off the shoes. Reportedly, she flies barefoot. Doesn't sound regulation to us, but what do we know? There are also reports that the $360,000 SR22 plane she bought is way too powerful for a novice who studied on a pretty low-rent Cessna 172, an easy craft to handle according to the experts. But her airborne ride does come complete with a parachute that can carry the whole airliner to safety, so she and her 147 kids have that going for them. She allegedly got into flying as a way to help refugees in Asia and Africa, but to date there have been no reports of Angie performing supply drops to food-deprived villages.

Harrison Ford's interest in flying started long before he became the pilot of the Millennium Falcon. In the 1960s, he took classes at the Wild Rose Airport in Wisconsin, but the now super-rich movie star couldn't swing $15 an hour for lessons and had to put his passion for aviation on hold. Fast-forward almost 50 years, and Han Solo not only has flown solo in both airplanes and helicopters, but he's also soared with some pretty lofty achievements. He was Chairman of the Experimental Aircraft Association's Young Eagles program for five years. He's rescued lost hikers near his Jackson, Wyoming, ranch. He was honored at the 6th Annual Living Legends of Aviation Awards. And to top it all off, he's even survived a copter crash. But even with all those accomplishments, we're left wondering if he can still make the Kessel Run in under 12 parsecs.

Before he was a country superstar and hit songwriter, Kris Kristofferson was a U.S. Army helicopter pilot. He moved to Nashville in the mid-'60s to break into the music business. To support himself in the lean years he had several odd jobs, from sweeping the floors at Columbia Studios (where he met Johnny Cash and rubber-necked during Dylan's "Blonde on Blonde" sessions) to piloting a helicopter for a Louisiana petroleum firm. Cash was not impressed with Kris' first set of demo tapes, but he got the Man in Black's attention when he landed his chopper in Johnny's backyard to deliver a second one. This meeting led Cash to record Kristofferson's "Sunday Morning Coming Down." Kris left his flying job soon after.

Hilary Swank learned to fly while filming "Amelia," this year's biopic about the famous female aviator lost at sea while attempting to circumnavigate the globe. But the Oscar winner stopped shy of getting her license because the studio's insurance policy would not allow her to take her solo flight under their watch. She has said she intends to follow through and get certified now that the film is done, but for the time being she can only go up accompanied by an instructor. Hilary took her newfound skill (and her teacher) on Oprah recently and helped a viewer overcome her fear of flying by taking her on a private ride.

The story goes that Morgan Freeman had wanted to fly a plane since he was a kid and would sit in English class daydreaming about piloting a fighter jet. Although he joined the Air Force as a mechanic, he didn't learn to fly until he was 65 years old. Aside from a brief run-in with the FAA in 2004 (his license was suspended for 45 days for breaking altitude rules), he's been flying for seven years and owns two planes: a twin-engine Cessna 414 and a Cessna Citation 501 SP jet. Freeman has said that one aviation item on his "Bucket List" is to fly a Sino Swearingen SJ30 business jet. Looks like he can check that off soon.

The $6.9 million plane was tested this summer, and Freeman is supposed to take delivery of his own sometime this fall.

Instead of wasting away in Margaritaville in 1986, Jimmy Buffet got his pilot's license and has been flying seaplanes ever since.

Currently, he owns a Dassault Falcon 900ex jet, but he used to have a different plane. In 1996, Buffett took Bono and his family for a ride on his craft, "Hemisphere Dancer." But the Jamaican police mistook the group for drug smugglers and opened fire on them. The bullet holes on the side of the fuselage caused Jimmy to retire the plane (now on display in Orlando) and the scary experience inspired him to write a song about the tale. "Jamaica Mistaica" was the result.