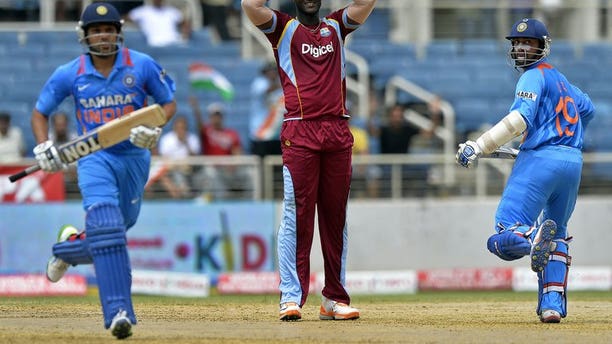 Dinesh Karthik (right) and Rohit Sharma take a run off the bowling of Darren Sammy (centre) in Kingston on Sunday. Stand-in West Indies captain Kieron Pollard won the toss and put India in to bat in the second match of the Tri-Nation One-Day International Series at Sabina Park. (AFP)

Stand-in West Indies captain Kieron Pollard won the toss and put India in to bat in the second match of the Tri-Nation One-Day International Series at Sabina Park in Kingston on Sunday.

Following a convincing, six-wicket victory over Sri Lanka in the first match of the tournament on Friday, the Caribbean side were forced into making two changes with regular captain Dwayne Bravo ruled out with a groin strain and fast-medium bowler Ravi Rampaul sidelined by a sprained ankle.

Devon Smith and Tino Best take their places in the final eleven.

It is reported that Rampaul could be out for as long as three weeks, however Bravo is expected to be fit for the Trinidad and Tobago leg of the competition from Friday. Wicketkeeper-batsman Denesh Ramdin is playing his 100th ODI, only the third gloveman from the region to reach that landmark.

Making their entry to the competition a week after defeating England in a rain-reduced Champions Trophy final in Birmingham, India have kept faith with the eleven who took them to the title at Edgbaston.

Speaking after the toss, Indian skipper Mahendra Singh Dhoni suggested that there is a lot of preparation moisture in the pitch which could present a challenge to the batsmen in the early overs.