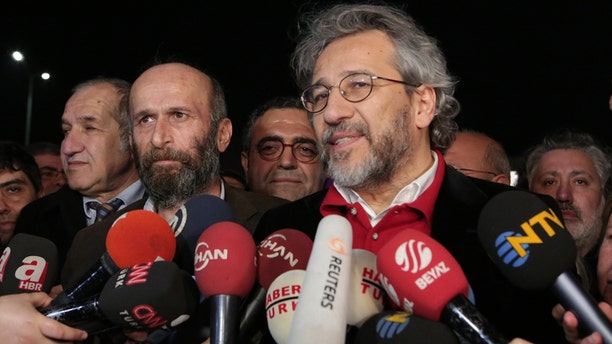 Feb. 26, 2016: Can Dundar, the editor-in-chief of opposition newspaper Cumhuriyet, right, and Erdem Gul, the paper's Ankara representative, front-left, speak to the media outside Silivri prison near Istanbul. (AP)

Two Turkish journalists went on trial on Friday on allegations that they revealed state secrets and helped a terror organization with their reports on alleged government-arms smuggling to Syrian rebels, a trial that has increased concern about the erosion of media freedoms in Turkey.

The pair are on trial for publishing images that reportedly date back to January 2014, when local authorities searched Syria-bound trucks, leading to a standoff with Turkish intelligence officials. Cumhuriyet said the images proved Turkey was smuggling arms to Islamist rebels.

The prosecutor asked that the hearing proceed behind closed doors in a request that was granted by the court, according to local media.

International media advocacy groups, who are pressing Turkey to drop charges, are closely watching Friday's opening hearing. The trial is seen as a bellwether of the future of press freedom in the country which has witnessed a growing crackdown on independent and opposition media over the past few years.

The journalists were arrested in November after Erdogan filed a personal complaint against the two. Turkey's Constitutional Court ruled in February that their rights were violated, leading to their release from jail.

Speaking to reporters as he entered the courthouse, Dundar said he was hopeful that the court would take the high court's ruling into account and drop charges.

"The Constitutional Court has already said that this news is not an act of terrorism but an act of journalism. So this judge, we hope, will approve this decision and drop (this) case," he said.

The indictment accuses the two of working with the Gulen movement to create the image that the government was aiding terror groups.

Government officials accuse Gulen's supporters of stopping the trucks as part of an alleged plot to bring down the government. The government has branded the movement a "terror organization" although it is not known to have engaged in any acts of violence.

Speaking in Istanbul on Thursday, the secretary general of Reporters Without Borders, Christophe Deloire, criticized the authorities for treating journalists as a threat when the country is facing real terrorism. He also criticized Erdogan, who filed the lawsuit against Dundar and Gul, for spearheading attacks against the media and creating an "atmosphere of fear."

A representative of the Committee to Protect Journalists also came to Turkey to attend the hearing. "They have done nothing wrong but committed the act of journalism," said Nina Ognianova. "They have covered a story of public interest that is important not only for Turkey but also the region and the international community."