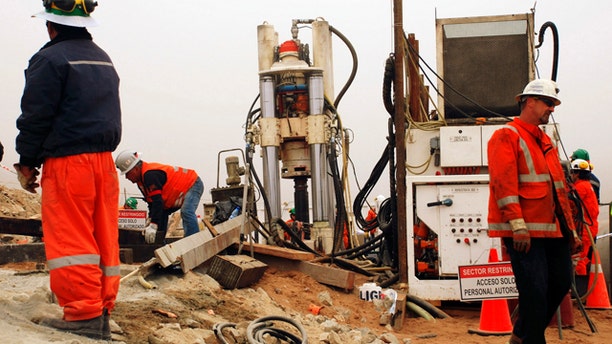 Aug. 31: Work is done on a new drill to be used in the rescue operation of 33 trapped miners at the San Jose mine in Copiapo, Chile. (AP)

One of the trapped Chilean miners is dreading his rescue after his wife met his secret mistress at the entrance to the San Jose mine, The Sun reported Thursday.

Yonni Barrios' wife, Marta Salinas, and Barrios' lover, Susana Valenzuela, were both holding vigils for him outside the mine.

Salinas was stunned when she heard Valenzuela shouting his name amid a crowd of miners' loved ones.

Salinas, 56, is said to be "horrified". However, she is determined not to give up her man to her love rival.

She told friends: "Barrios is my husband. He loves me and I am his devoted wife. This woman has no legitimacy."

But Valenzuela said the 50-year-old miner, who she met on a training course five years ago, was planning to leave his wife for her.

Barrios has been one of the heroes of the landslide drama -- using his first-aid training to treat sick colleagues.

He also vaccinated all 33 men, including himself, against flu and pneumonia.

Meanwhile, the captives have been hit with an alcohol and tobacco ban by National Aeronautics and Space Administration (NASA) experts helping the rescue.

A NASA doctor, James Michael Duncan, said: "We need to get their nutrition up before we consider drinking."

Two of the smokers have been dropped nicotine patches and gum to deal with their cravings.

But the miners -- who may not be drilled out until Christmas -- have started eating proper meals of 2,000 calories a day.

Their rations include yogurt and cereal for breakfast, chicken sandwiches for lunch and jam sandwiches for dinner. They each have tea and five liters of water daily.