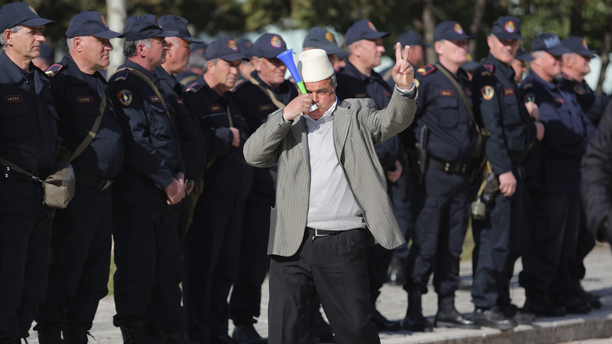 A protester flashes the victory sign in front of Albanian policemen guarding the parliament building as opposition supporters gather to take part in an anti-government rally , in Tirana , Albania, Tuesday, March 5, 2019. The opposition demanded the government step down, claiming it's corrupt and has links to organized crime. (AP Photo/ Hektor Pustina)

Thousands of protesters supporting Albania's opposition have surrounded the parliament, demanding the government's resignation and early elections and accusing the Cabinet of corruption and crime links.

The parliament building in capital Tirana was surrounded Tuesday by hundreds of police officers and barbed wire.

Lawmakers of the center-right Democratic Party-led opposition have resigned from their posts.

The opposition has not heeded calls from the European Union, the U.S. and international organizations to enter talks with its political rivals.

Albania hopes to launch membership negotiations with the European Union in June.