Taliban commander who attacked Malala is killed in Pakistan 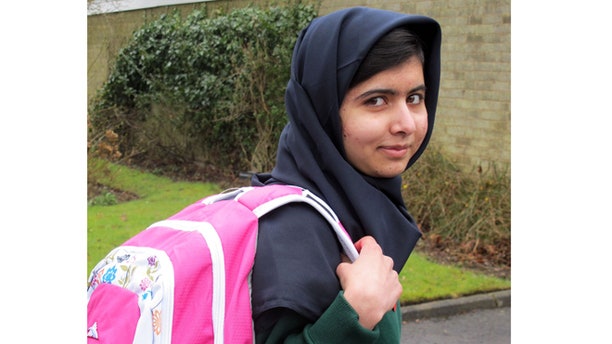 March 19, 2013 - FILE photo of Malala Yousafzai, the Pakistani schoolgirl shot in the head by the Taliban, as she attends her first day of school, weeks after being released from a hospital. The 15-year-old participated in lessons at the Edgbaston High School for Girls in Birmingham, central England. She survived an assassination attempt by the fundamentalist political group in October last year and underwent hours of surgery in the UK to try and repair the damage caused by a bullet which grazed her brain. (AP)

Pakistani police counter-terrorism officers on Monday killed four terrorists including a commander of the banned group Tehreek-e-Taliban Pakistan (TTP), who was involved in the 2012 attack on the child rights activist and Nobel Laureate Malala Yousafzai.

All four militants were killed in a police shootout, conducted at the Southern port of city of Karachi, police officials confirmed.

A man identified as Khursheed – a cousin of the current TTP chief Mullah Fazalullah – was identified among the dead. He was linked to various terrorist attacks on security personnel as well as the attack on Malala.

“I am going to share good news with you that a cousin of TTP chief Mullah Fazlullah has been killed,” Senior Superintendent of Police Rao Anwar told reporters at the site of the shootout.

“Khursheed was involved in various incidents of terrorism, including attacks on education activist Malala Yousafzai as well as military and police in Karachi’s Quaidabad area,” Anwar said. “All the militants were members of the TTP Swat and were planning to carry out terrorist activities in the city.”

Malala was 15 when the brutal group attacked her in the militant-stricken Swat Valley where the group has launched its own illegal FM radio station, urged a jihad and motivated women to remain inside their homes. But, Malala stood against the Taliban and challanged them to continue her education in home despite bombing down of all the girls schools in the valley.

Swat residents during the brief rule of the Mullah Fazalullah complained of public hangings and beatings.

Shakir Ali, a station house officer in the Sachal area of Karachi, said on Monday the police identified Khursheed with the help of the documents recovered from his possession. “The police are also trying to identify the remaining terrorists killed in the encounter,” he added.

Malala was attacked and shot at close range by the gunmen in October 2012, as she left school in the Swat Valley.

MALALA TO STUDY AT OXFORD

Days after the attack, Pakistan’s Taliban described Malala as a “spy of the West.” “For this espionage, infidels gave her awards and rewards. And Islam orders killing of those who are spying for enemies,” the group said in a statement.

In June 2015, a Pakistani court in the northwestern province of the Khyber Pakhtunkhwa freed eight out of the 10 militants charged with the shooting of Malala. That move however, raised serious questions about the country’s criticized judicial system.

Various global leaders condemned the attack on Malala. Hillary Clinton, who was then the U.S. secretary of state, said the girl had been “very brave” in standing up for the rights of other girls.

“The American people are shocked by this deplorable shooting of a girl who was targeted because she dared to attend school,” the White House said in 2012.

Last month, Malala announced on Twitter that she had been accepted to study politics, philosophy and economics at Oxford University.

MALALA SPEAKS OUT AGAINST BOKO HARAM

Malala became a global symbol of defiance and won 2014 Nobel Peace prize. She now lives in the U.K.

Fazalullah's presence was so strong in the Swat that then-President Asif Ali Zardari in 2009, under pressure from conservatives, signed a regulation imposing Islamic Sharia law in the Swat Valley as part of a deal to end Taliban violence.

Khursheed was killed in Karachi, Pakistan’s most populous and violent metropolis port city, where various wanted militants have hidden in the past. Khalid Sheikh Mohammed, the 9/11 mastermind, was arrested in Karachi in 2002. The American journalist Daniel Pearl had been kidnapped and beheaded there earlier in the same year.

Karachi has been rife with political, sectarian and ethnic tensions. A strategic operation by security forces in recent years has brought a lull in violence, but scattered attacks still unfold.

Haroon Janjua is an investigative journalist reporting on security issues, militancy, economy and human rights from Islamabad, Pakistan. Follow him on Twitter @JanjuaHaroon.