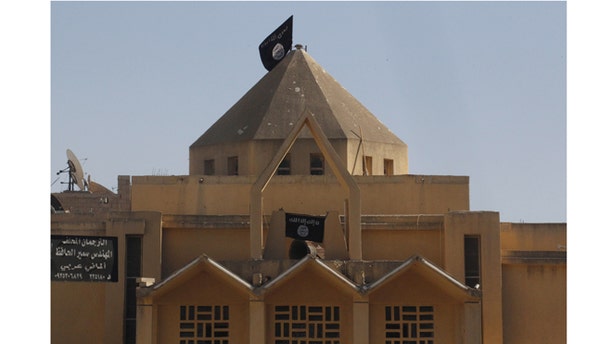 September 27, 2013: Flags of the Islamic State of Iraq and the Levant are hung on The Martyrs Church in the city of Raqqa. The Al-Qaeda linked groups removed crosses from the structure and hoisted their flags. (Reuters)

Radical Muslim rebel groups in Syria reportedly are shaking down the Christian population for protection money in the form of gold.

In a document released by the Islamic State in Iraq and the Levant, the groups stated that a “protection pact” or “Aqed al-Thima” was coordinated and reached in a meeting last Thursday with 20 Christian leaders from the northern province of Raqqa.

The authenticity of the two-page document, which has been circulating online this week, has not been independently verified, but could stoke fears among Syria’s Christian minority population that they are becoming targets by extremists looking to overthrow President Bashar Assad.

“It underscores that fact that as a Christian you are left with the choice between siding with a dictator or siding with the rebels,” Jordan Sekulow, Executive Director of the American Center for Law and Justice, which advocates for Christians in the States and in the Middle East, said to FoxNews.com. “If the Civil War ends, what will stop them from being in danger from extremists?”

“This is the difficult choice that they [Christians in Syria] face—try to survive or lose your faith and die or side with a dictator whose crimes have repulsed the world?”

Syria's minorities, mostly Christians, have sided with Assad or remained neutral in the three-year-old civil war. Some fear for their fate if the rebels, increasingly dominated by Islamic extremists, come to power and some have stopped supporting Assad altogether.

Under the strict Islamic Sharia doctrine, non-Muslims living under their sovereignty must pay a special tax -- known as the "Jizyah" -- in return for the ruler's protection, or “Thima.”

The document stated that the tax could be paid in two annual installments by all "adult" Christians.

The amount was set at "four golden dinars," saying each is worth 4.25 grams (0.15 ounce). It said the middle class would pay half the rich, while the poor would pay only "one golden dinar."

In addition to agreeing on payment for protection, the Christian leaders in Raqqa reportedly agreed to refrain from refurbishing churches or monasteries in Raqqa, to hold back all religious symbols, such as displaying crosses in public or using loudspeakers in prayer, adhering to a "modest" dress code and refraining from trading in pork meat and alcohol and drinking it in public.

"If they adhere to these conditions, they will be close to God and receive the protection of Muhammad, his prophet," the document allegedly said.

Christians as well as human rights groups have accused radicals among the rebels of abusing residents and vandalizing churches after taking Christian towns.

Al-Qaeda-linked militants seized control of Raqqa last March and set fires to churches before knocking crosses off them and replacing them with the group's black Islamic banner.

Twelve nuns, two bishops and a priest were also abducted by Islamic extremists.

Before the Islamic takeover, the Raqqa province made up about 10 percent of the areas half-million inhabitants.