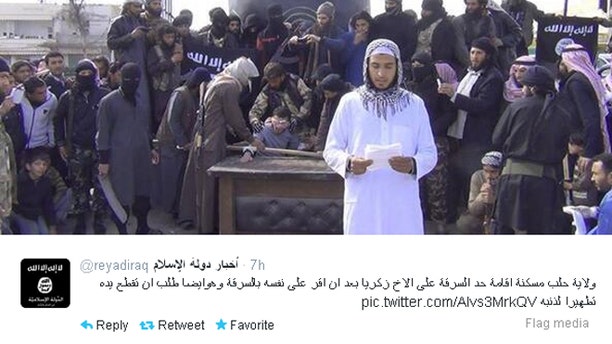 An extremist Syrian group took to Twitter Friday to live-tweet pictures of rebels helping to chop off the hand of an alleged thief.

The amputation happened in the rural town of Maskanah in the northern province of Aleppo, according to a series of posts on a Twitter account belonging to a supporter of the extremist Islamic State of Iraq and Syria.

The first photo showed rebels positioning the hand of a blindfolded man on a table as a large crowd looked on, the Washington Post reported Friday. A masked man nearby is holding a large sword. Another man, wearing the traditional white robe favored in Arab Gulf countries, reads from a paper statement.

The photo caption suggests the blindfolded man is a thief who had asked to have his hand cut off “in order to cleanse his sins.”

In a second picture posted a few minutes later, it is clear the sword is about to strike the victim’s hand while two men restrain him. A third picture posted an hour later showed a close up of the victim’s severed hand separated from his arm and the bloody sword hovering over a red puddle on the table. The man appears to be passed out.

Many ISIS fighters came from the al Qaeda-affiliated group Islamic State of Iraq, which U.S. forces battled to contain before they withdrew in 2011.

The group has made attempts in the past to impose strict interpretations of Islamic law on parts of rebel-held northern Syria. Mainstream Free Syrian Army fighters declared war on the group in January and ejected its fighters from several areas.

The group may have proved too extreme, as al Qaeda’s central command issued a statement earlier this month disassociating the organization from ISIS, suggesting its methods were too harsh even for al Qaeda to tolerate.

On Tuesday, al Qaeda's official Syrian affiliate, Jabhat al-Nusra, gave ISIS an ultimatum, threatening battle unless ISIS submits to arbitration of its disputes with other rebels.

ISIS pulled out from the northern town of Azaz under pressure Friday.