At dawn Tuesday morning, as families slept in the battle-ravaged Syrian city of Idlib, bombs fell into homes in the rebel-controlled town of Khan Sheikhoun … not an entirely unusual way to wake up. Only there was something different about these bombs.

“We were attacked with four strikes,” 27-year-old Syrian journalist Hadi Abdullah told Fox News. “When people went to help, they were choked with the poisoned gas.”

U.N. war crimes investigators are now evaluating a suspected chemical attack in the rebel-controlled area of northern Syria, which if confirmed would constitute a “serious violation of international law.” Abdullah, himself still wet-eyed and breathless and tending to a “massive headache” as we spoke, recalled the scene just hours earlier – chaos, crying, people being stripped and washed in the streets, children suffocating and dying in the streets as white liquid frothed from their open mouths.

“People were also looking for their families, wondering if they had yet been taken to medical treatment,” he continued. “There’s a blaring pain in my eyes, I can’t breathe and my nose won’t stop running. But I’m a lot better than most.” 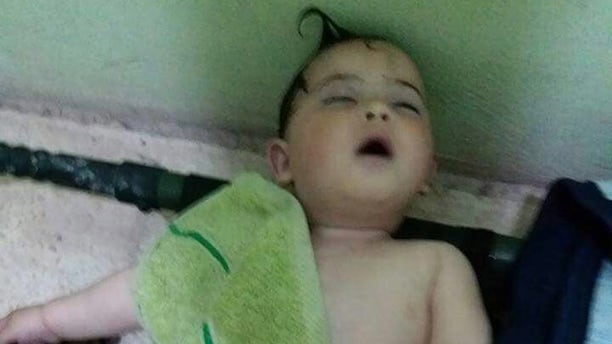 Muhammad, field coordinator of Alrahama Hospital in Khan Sheikhoun, which is in the Idlib governate, told Fox News that their rooms were flooded with some 200 locals young and old – some with pinpoint pupils, others dilated, some already drenched in water while others required resuscitation. Atropine – a medication used intravenously to treat certain types of nerve agent exposure – was distributed as widely as possible, but the best chance one had of survival was being relocated to safer area in the northern part of the region.

“Most kids arrived already dead, especially the infants. They were more affected than the adults. Twenty-five deaths happened in our hospital,” Muhammed said.

He detailed the tiny bodies convulsing for their last breaths, the white rubble debris and red blood that clung to their deadly pale faces. Two nurses, he recalled, fainted from the chemical residue.

But just as patients were being rushed inside for a chance at life, several sources on the ground told Fox News that their hospital was coming under aerial attack again – disrupting their medical care and sending them into emergency evacuation as rockets ripped through the hospital’s walls.

“This was a double crime. The center helping civilians was hit eight more times. Luckily, we survived,” Abdullah, who was in the facility when it struck, said. “People are still dying inside.” 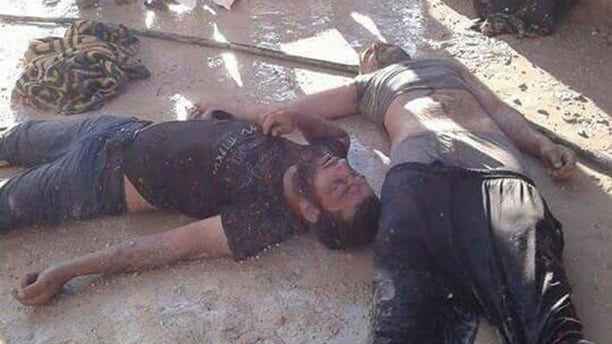 In one case, he said, an entire family – parents and three children – were found dead in their beds from the initial allegedly chemical attack. Abdullah also emphasized that many are trying to get to Turkey for treatment.

“Some did; some died,” he said. “Mostly it is the children dying.”

Activists claimed that victims were stranded on the Syrian side of the Bab Al Hawa border crossing to Turkey, begging for access into the neighboring country.

“The Syrian people feel alone in the international silence,” Muhammed explained. “Everywhere in Idlib people are so frightened, attacks in neighboring towns have been going on for three days. People are trying to flee to less risky towns.”

But the reality, he stressed, is that the vast majority of families left there have stayed because they are too poor to flee, and are just waiting day-by-day to live or die.

“Some people have now fled to safer areas in the countryside outside the city,” said Suhaib Monzer Zakour, an Idlib-based civilian and former engineering student at the University of Aleppo. “Everyone is devastated. The children are in shock. Many people are afraid of another attack like this.”

Zakour observed that while people were still “living in the horrified hours” in the immediate aftermath of the chemical onslaught, there remains a kind or resilience – a sense of people simply trying to survive and live day-by-day.

“People are still trying to work, to live,” he said. “And find something to live for.” 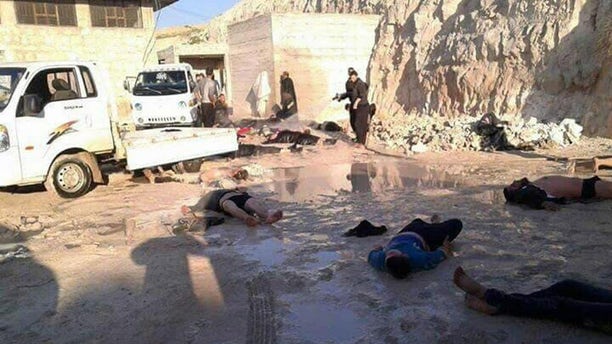 Such is the tenor of life in Idlib, one of the last standing Syrian opposition strongholds that many fear will soon become the next Aleppo and be bombed and blistered back into government control.

According to Syrian Dr. Khaled Al Milaji, the attacks on civilians have reached a pinnacle and they are seeing some of the worst carnage of all the six-year civil war – with Tuesday’s apparent chemical strike killing at least 100 and injuring as many as 500 people.

“The bombs fell as people were sleeping which is why the number of dead is so big. Many just inhaled the gas, there was no time to resist,” he said. “Many, especially the infants, died directly – they didn’t even make it to the hospital.”

The dead, Milaji explained, were those who were in the “red zone” when the suspected gas struck. Those on the periphery of that zone were the ones being rushed to hospitals, gasping for breath and foaming at the mouth, in the hopes of being saved. But few hospitals are left standing – their destruction all over Syria a hallmark of the conflict’s brutality.

Subsequently, in the immediate aftermath of the attacks, doctors were forced to treat the wounded in the rubble streets.

“Typically, the doctors set up temporary clinics and do not officially reveal their location. It usually takes 48 hours for it to be found out so then they have to move again to avoid being bombed,” he said.

The initial medical summaries that Milaji was getting following Tuesday’s attack indicated that the substance used was “more than just chlorine,” and that they strongly suspect “sarin or worse” was also utilized. Sarin is next to impossible to detect, due to its clear, tasteless and non-odorous nature.

“Chlorine is awful, but it doesn’t kill in mass numbers like this,” Miliaji said.

Multiple sources on the ground told Fox News that the seemingly toxin-laden bombs were dropped from what appeared to be Sukhoi-type fighter aircraft, primarily used by Russian and Syrian forces. Khaled pointed out that Syrian planes generally launch attacks from higher altitudes, while Russians fly much lower to the ground and with much greater precision. In this case, Syrian aircraft is suspected.

However, this has not been independently verified and the Assad-helmed Syrian government, as well as Russian officials, have vehemently denied involvement, instead blaming rebel fighters. The government has denied previous accusations by western powers of having used chemical weapons in 2013.

Dr. Souheil Habbal, director of the California chapter of the Syrian American Medical Society (SAMS) – which directly supports medical facilities on the ground – told Fox News their professionals are continuing to treat the wounded and that casualty counts are expected to rise as victims are being treated both in the streets and in temporary facilities outside of the battle-ravaged city.

He also affirmed that, based on early assessments, the bombs dropped were likely filled with a chemical concoction that included sarin.

“The doctors are having to choose who to save; that is the worst thing. To look at the more advanced patients and choose instead to save someone who isn’t suffering as badly,” he said. “At least 21 who have died are children.”

TIMELINE OF CHEMICAL WEAPONS USE IN SYRIA

The SAMS-supported hospitals do have a “very limited” supply of atropine, he said, but they are fast running out. He also said that their medical professionals did undergo specific training for chemical warfare in Aleppo in 2015, in the wake of previous attacks. But most of their gas masks and suits were left when the formerly opposition-controlled city came under intense bombardment in December of last year, eventually falling to government forces.

“The world is only focused on ISIS,” Habbal lamented. “But there was no ISIS here. None of us should accept this.”

However, Max Abrahams, professor of political science at North Eastern University and an proponent of forced regime change in Syria, stressed the importance of not pointing fingers until a proper independent investigation into the attack is complete.

“But even if it was Assad, that is not enough to persuade me to force a regime change,” he added. “The alternative is really bad, there is no moderate game in town. Everyone has blood on their hands.”