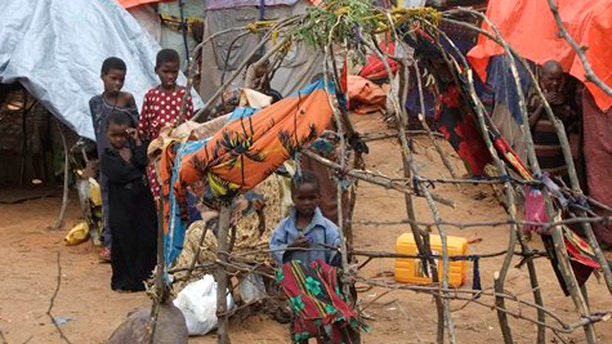 Child from southern Somalia stand near their makeshift shelter at a camp in Mogadishu, Somalia, Monday, Aug 1, 2011. Tens of thousands of famine-stricken Somali refugees were cold and drenched after torrential rains overnight pounded their makeshift structures in the capital, Mogadishu. Rains are needed to plant crops and alleviate the drought that is causing famine in Somalia but on Saturday night the rains added to the misery of refugees who live in structures made of sticks and pieces of cloth. (AP)

Muslims around the world mark sundown during the holy month of Ramadan with extravagant dinners to break their daily fasts. That kind of nighttime celebration is unthinkable this year for most Somalis, who already are suffering empty stomachs during the worst famine in a generation.

Tens of thousands of Somalis already have fled starvation to the world's largest refugee camp in neighboring Kenya, where Mohamed Mohamud Abdulle said people can't fast without food "to console the soul" at sundown.

"Today is the worst day I ever faced. All my family are hungry and I have nothing to feed them," Abdulle said on Monday, the first day of the Muslim holy month. "I feel the hunger that forced me from my home has doubled here."

Somalis fleeing famine say they simply don't have enough food to prepare a traditional feast to end a day of fasting. Refugees say they have been unintentionally fasting for weeks or months, but without the end-of-day meal to regain their strength.

"I cannot fast because I cannot get food to break it and eat before the morning," said Nur Ahmed, a father of six at a camp for internally displaced people in Mogadishu called Badbado. Ahmed's wife died last year during childbirth, he said.

For most of the Muslim world, Ramadan this year falls at a time of rising food prices and political upheaval. Food prices typically spike during the Muslim religious month, and the elaborate dinners many in the Middle East put on to break the daily fast drive a deep hole in household budgets.

The U.N. says more than 11 million people in the Horn of Africa need food aid, but that 2.2 million need aid in a region of south-central Somalia controlled by the Al Qaeda-linked militant group al-Shabab, which has not let many aid agencies operate in its territory, including the U.N. World Food Program.

"This operation demonstrates the ICRC's ability to deliver emergency aid directly to the people affected in southern Somalia," said Andrea Heath. "But this distribution assists only a small percentage of those in need. More aid will be required to help the population bridge the gap until the next harvest in December."