Greek investigators have seen "serious indications" that a forest fire that killed at least 82 people outside Athens was set deliberately, a government official said Thursday.

"We have serious indications and significant findings of criminal activity concerning arson," Toskas said. "We are troubled by many factors, and there have been physical findings that are the subject of an investigation."

The Hellenic Fire Service's special arson section, which probes all major fires, is investigating to determine the exact cause of the blaze. The mayor of the area where it broke out previously said it might have been sparks from a severed electricity pylon cable. 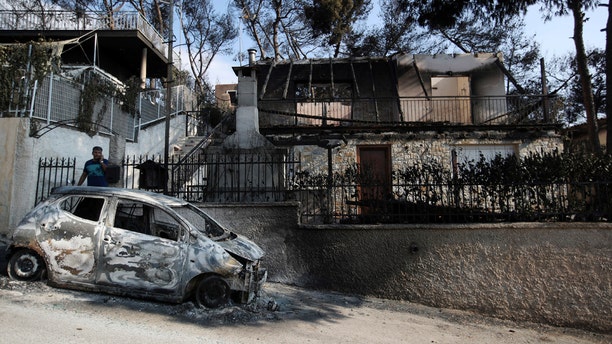 A man stands next to his burned house and car as he speaks on his cellphone in Mati, east of Athens, Wednesday, July 25, 2018. Rescue crews were searching through charred homes and cars for the missing after wildfires decimated seaside areas near the Greek capital, killing at least 74 people and sending thousands fleeing. (AP Photo/Thanassis Stavrakis) (Copyright 2018 The Associated Press. All rights reserved.)

The fire broke out near Rafina, northeast of the capital. Fanned by gale-force winds, it raced through seaside resorts of full-time homes and vacation residences popular with Athenians and tourists.

The large area the flames swept through further complicated the process of identifying victims. Officials said there was no way of knowing how many people were there at the time. As of Thursday afternoon, there was still no official number of missing.

At the Athens morgue, frantic relatives were informed about the steps needed to match one of the bodies held there to a missing person, including providing DNA samples and dental records. Police said a team specializing in the identification of disaster victims was brought in at the request of the fire department.

"The procedure is difficult, harder than that of other mass disasters which we have dealt with in the past as a forensics department," coroner Nikolaos Kalogrias said. "Here, the main cause of death was burning, in most cases the complete burning (of the body), so identification is very difficult." 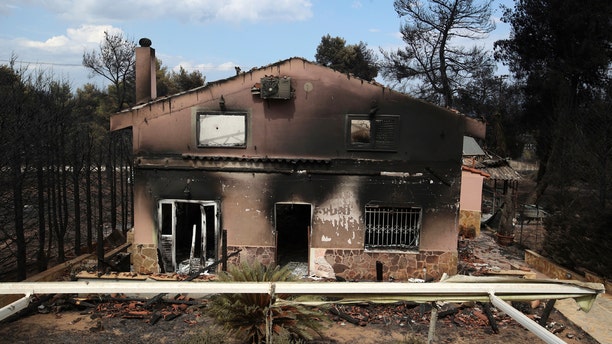 Germany's federal criminal police said a team of forensics specialists arrived in Greece to help authorities identify the dead. The team members have worked on major disasters such as the 2002 plane crash in Ueberlingen, Switzerland, and the 2004 Asian tsunami.

Thanassis Moraitis went to the morgue searching for his 90-year-old mother.

He had tried to drive away with his mother, wife and 19-year-old son, but the fire was too fast. They had to abandon the car and started running to the beach and into the water. Moraitis suffered burns to his leg from the heat of the air. His mother didn't make it.

"In the sea, there was a rain of fire, there was smoke, there was a Force 12 wind," said the 53-year-old, adding that boats picked the family up after about three hours. 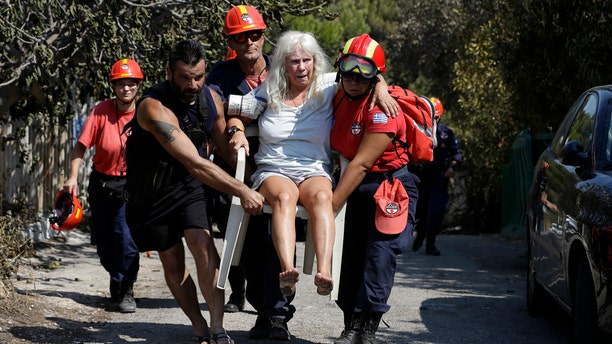 Members of a rescue team carry an injured woman in Mati, east of Athens, Wednesday, July 25, 2018. Rescue crews were searching Wednesday through charred homes and cars for those still missing after the deadliest wildfires to hit Greece in decades decimated seaside areas near Athens, killing at least 79 people and sending thousands fleeing. (AP Photo/Thanassis Stavrakis) (Copyright 2018 The Associated Press. All rights reserved.)

"I didn't even get a chance to say goodbye to my mother," Moraitis said.

Fire department spokeswoman Stavroula Malliri said the search for victims continued and would not end until every building had been thoroughly investigated. Rescue crews had not been able to enter homes that had not been destroyed and were shut, she said.

Apart from the house-to-house searches, coast guard and volunteer divers were searching the waters off the coast and a nearby deserted island. Hundreds of volunteers lined up at the Rafina town hall to offer whatever help might be needed.

During the fire, hundreds fled to nearby beaches, with many swimming out to sea to escape the ferocious flames and choking smoke. Dozens spent hours at sea before being picked up by coast guard vessels, fishing boats and a passing ferry. Several of the dead had drowned. 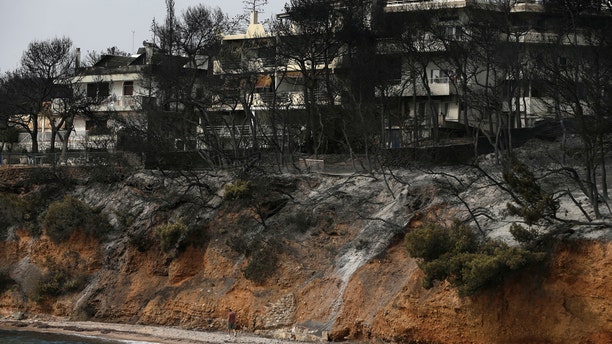 A man walks on the beach where burned trees hug the coastline in Mati east of Athens, Tuesday, July 24, 2018. Twin wildfires raging through popular seaside areas near the Greek capital have torched homes, cars and forests and killed at least 49 people, authorities said Tuesday, raising the death toll after rescue crews reported finding the bodies of more than 20 people huddled together near a beach. (AP Photo/Thanassis Stavrakis) (Copyright 2018 The Associated Press. All rights reserved.)

The worse affected area was the seaside community of Mati, where the majority of victims were found, including 26 people found huddled together, many embracing.

Arriving at the morgue with her son, Maria Saridou was hoping her 55-year old sister, Eleni, was not among the victims. She had gone swimming with a friend of hers in Mati, Saridou said, but the two became separated in the chaos of the fire. She hadn't heard from her since.

"We found her car, it wasn't burnt, nor was the house," said 60-year-old Saridou. "It's just that we can't find her. ... I believe she's alive. Where she went, nobody knows where she went."

Hundreds of homes were burnt. The speed with which the flames spread took many by surprise. The narrow streets of Mati, an area built up with no town planning, quickly became clogged with parked and abandoned cars as people tried to flee, hampering access by firefighting trucks and blocking escape routes.

One Belgian national and one Irish national were among those confirmed dead. 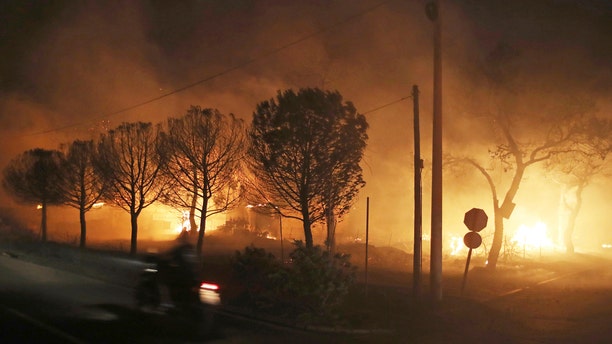 Buildings burn in the town of Mati, east of Athens, Monday, July 23, 2018. Regional authorities have declared a state of emergency in the eastern and western parts of the greater Athens area as fires fanned by gale-force winds raged through pine forests and seaside settlements on either side of the Greek capital. (AP Photo/Thanassis Stavrakis) (Copyright 2018 The Associated Press. All rights reserved.)

Some of the casualties are believed to have tried to make it to the shore through narrow pathways, but lost their way in the thick smoke or had their paths blocked by the swift-moving blaze. Even those on beaches were not safe, as flames burned trees and vegetation at the water's edge, while flaming pine cones rained downward, survivors have said.

Recriminations about the apparent lack of an evacuation plan and what many perceived to have been a slow response has mounted, with survivors saying they had been abandoned to do whatever they could to save themselves alone.

Firefighting and rescue efforts, particularly from the air and the sea, were hampered by gale force winds and rough seas. When the Rafina fire broke out, crews were also engaged in fighting a massive fire west of Athens that had broken out hours earlier and also burnt homes.

But survivors have accused authorities of failing to adequately prepare and for not evacuating the area, as well as not responding fast enough.

Defense Minister Panos Kammenos visited Mati Thursday morning and was heckled by distraught men and women, who accused authorities of not doing enough in the initial hours of the fire.

"People died for nothing!" one woman sobbed at the minister.

Local resident Giannis Kardiakos, who said he stayed in the area until midnight, said efforts to tackle the blaze and to rescue those who had fled to the beaches started too late.

"There was no protection, there was nothing! ... I'm saying things as they were," he said, as Kammenos detailed what the military and firefighters had been doing to battle the fire. "I'm not lying. We're not talking politically here," he added, before breaking down in tears.