No credibility in report of ISIS training camp on U.S.-Mexico border, congressman says 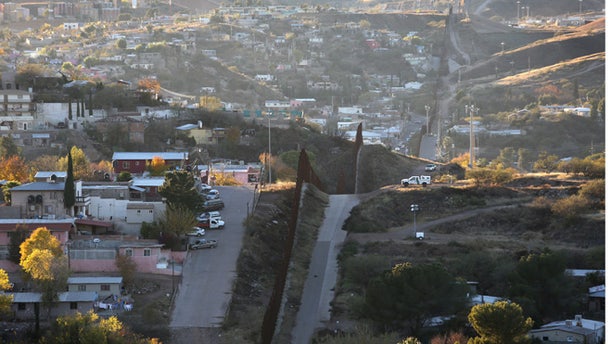 NOGALES, AZ - DECEMBER 09: A U.S. Border Patrol agent watches over the U.S.-Mexico border fence from his vehicle on December 9, 2014 in Nogales, Arizona. With increased manpower and funding in recent years, the Border Patol has seen the number illegal crossings and apprehensions of undocumented immigrants decrease in the Tucson sector. Agents are waiting to see if the improved U.S. economy and housing construction will again draw more immigrants from the south. (Photo by John Moore/Getty Images) (2014 Getty Images)

In an attempt to downplay rumors and ease concerns along the U.S.-Mexico border, a congressman from Texas has said that there is no evidence that the Islamic terrorist group ISIS has opened a training camp in Ciudad Juárez.

Responding to a report on the website Judicial Watch, Rep. Beto O’Rourke (D-TX) said that the Mexican government, the U.S. Department of Homeland Security and the U.S. Northern Command have told the lawmaker that there is no evidence that ISIS is operating along the border.

“Stories like these are good at scaring people and getting attention for those who spread them,” O’Rourke wrote on his Facebook page. “But they are terrible for the country's image of the border, for El Paso's ability to recruit talent, and for our region's opportunity to capitalize on the benefits of being the largest bi-national community in the world.”

The rumors of an ISIS camp near the Mexican border of Ciudad Juárez began with an April 14, 2015 story on the Judicial Watch website that cited unnamed “sources that include a Mexican Army field grade officer and a Mexican Federal Police Inspector” who claimed that “the terrorist group has established its base is around eight miles from the U.S. border in an area known as ‘Anapra’ situated just west of Ciudad Juárez in the Mexican state of Chihuahua. The website added that its sources also knew about an ISIS camps west of Juarez, which planned to attack towns in New Mexico.

Judicial Watch also noted a number of locations along the border that ISIS was allegedly targeting because of low levels of Border Patrol staffing and also purportedly pulling off reconnaissance of universities, the White Sands Missile Range government facilities and military bases.

“As a member of the House Homeland Security committee in the 113th Congress, I asked the director of the FBI, the director of the National Counterterrorism Center and the Secretary of Homeland Security if there was currently any terrorist threat on the Southern border,” O’Rourke reported. “They answered that there was not, nor had there ever been, any terrorist, terrorist plot, or terrorist organization that was able to exploit our border with Mexico.”

This is not the first time that these kinds of reports have surfaced about ISIS or other terror groups using the southern border with Mexico to sneak into the U.S.

Last fall, officials at the Department of Homeland Security officials said that there is no credible evidence that members of the Islamic militant group plan to use the border to enter the U.S. following an uproar caused by comments from lawmakers, including senators Ted Cruz (R- TX) and John McCain (R-AZ). Instead, officials told Congress that they are more concerned with terrorists entering the U.S. via commercial airline flights.

"The number of known watch-listed persons we are encountering on the Southwest border is minimal compared to commercial aviation," said John Wagner, assistant commissioner in the U.S. Customs and Border Patrol's Office of Field Operations. "We're talking tens versus thousands."