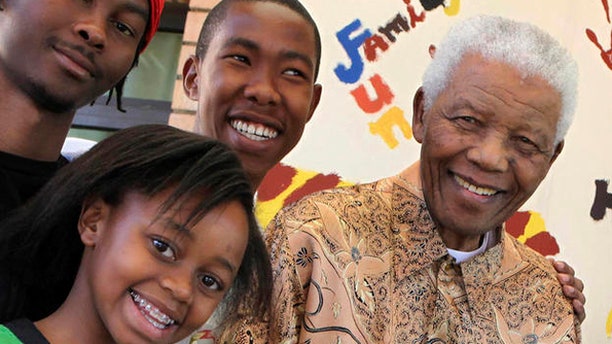 Former President Nelson Mandela spent his 93rd birthday with friends and relatives in his rural hometown Monday, as South Africans paid tribute to the anti-apartheid icon through song and community service projects.

U.S. President Barack Obama called Mandela "a beacon for the global community, and for all who work for democracy, justice and reconciliation."

South Africa's current president, Jacob Zuma, also paid a visit to Mandela in his home village of Qunu, some 600 miles (1,000 kilometers) south of Johannesburg. Zuma spent more than two hours with the former president, before leaving with members of the Mandela family, including the icon's former wife, Winnie Madikizela-Mandela.

"I came to spend time with the Mandela family, to rejoice with them, but also to eat cake. There was a huge cake," Zuma said with a smile.

"Mandela is absolutely in good spirits," he said.

Photos released of Mandela showed the 93-year-old smiling broadly while sitting in a yellow fabric arm chair surrounded by relatives.

People around the world were asked to mark his birthday by giving 67 minutes of their time to work in their local community -- one minute for every year of Mandela's public service.

He became South Africa's first black president in 1994 after spending 27 years in prison for his fight against racist apartheid rule, and was awarded a Nobel Peace Prize for his efforts.

Nazly Mayet, a Johannesburg mother of four, brought her children to a local community hall afterschool to play with disadvantaged children from nearby shelters.

"Being South African means volunteering your time on Mandela Day," she said.
Mandela is "the person that represents our freedom, opportunities for everyone ... He seems quite fragile, but his spirit will live forever."

Mandela's public appearances have become increasingly rare, though he did appear at the closing ceremony of the World Cup one year ago.

Earlier this year, he was hospitalized for a few days with an acute respiratory infection.

Last month, he held a private meeting with Michelle Obama when the first lady traveled to South Africa with her daughters.

His foundation also has recently released "Nelson Mandela By Himself," a book featuring more than 2,000 Mandela quotations on topics ranging from freedom to forgiveness to HIV/AIDS.

David Tsoago said he did 67 minutes of community service on Monday to honor Mandela's legacy.

"For him to be old as he is, we're worried, but what can we do?" he asked. "We're all going to be old also. We have to celebrate when we can."

South African businesses donated food, clothing, books and other supplies to shelters across the country, and the national blood service has used the opportunity to appeal for people to donate blood. Several libraries housed in shipping containers were opened in rural areas, to allow children access to educational materials.

Monday morning as they wished their "Tata Mandela" a happy birthday.

Most of the students are fire victims from South Africa's impoverished townships and have received assistance from the Children of Fire charity.

Charity founder Bronwen Jones said the lesson is especially valuable for children who have been through adversity. She said one in three of the children were burned intentionally.

"For them to be able to rise from that and forgive the people who hurt them, there's no better example than Madiba," she said.