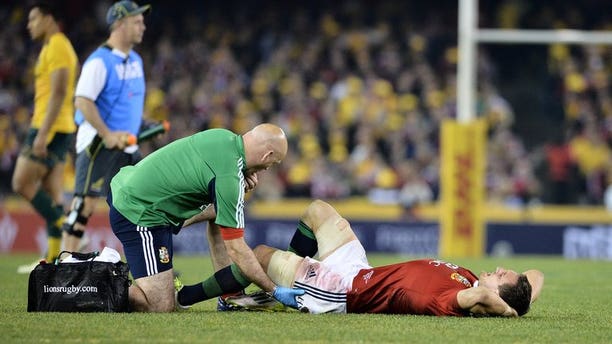 Lions captain Sam Warburton lies injured during the second Test against Australia on June 29, 2013. Warburton has been ruled out of Saturday's deciding Test in a massive blow for the tourists. (AFP/File)

Injured Lions skipper Sam Warburton has been ruled out of Saturday's deciding Test against the Wallabies in a massive blow for the tourists.

Scans revealed a 'significant tear' in his left hamstring suffered late in the Lions' 16-15 second Test defeat to Australia at the weekend and the Welsh flanker will now miss the series showdown in Sydney, the officials said.

Irish veteran Brian O'Driscoll is now expected to captain the tourists in what will be his final Lions Test.

Warburton came off 13 minutes from the end of the second Test and remained in Melbourne after the match under the supervision of Lions team doctor Eanna Falvey to undergo a full medical assessment.

"It is incredibly disappointing to be ruled out of the tour through injury as we head to Sydney for the deciding match," Warburton said in a team statement.

"I wish the team all the best and hope I can play some part in the build up this week.

"I am confident that the boys can finish the job off and secure the series win."

The devastating news for the 24-year-old forward, who missed the Lions' opening two wins in Hong Kong and Perth with knee ligament damage, comes as he struck top form in the second Test.

Warburton became the youngest Welsh Lions tour captain in Lions history when he was named skipper in May.

He led Wales to the 2011 World Cup semi-finals only to be sent off in a narrow defeat by France in Auckland.

After he missed the early part of the last European season through injury, Warburton starred against Scotland and in the record 30-3 thrashing of England that lifted Wales to the Six Nations title.

The injury follows the loss of experienced forward pack leader Paul O'Connell, with a broken arm from the the tourists 23-21 first Test win over the Wallabies in Brisbane.

Ireland's Sean O'Brien is likely to replace Warburton in the Lions team at number seven for Saturday's third Test.