A river near the inter-Korean border ran red after being polluted by blood from pig carcasses. This, on the heels of an outbreak of African swine fever in South Korea.

South Korean authorities slaughtered 47,000 pigs to try to halt the spread of the fever, according to BBC. The pigs were stacked in a truck at a burial site near a tributary of the Imjin River, and after heavy rains, the blood seeped into the water source. 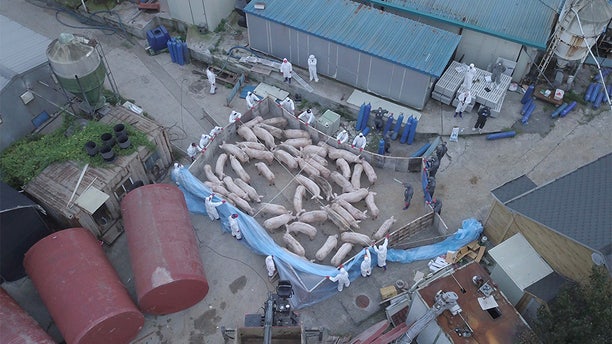 Workers don protective suits and drive pigs to the slaughter in September at a farm in Paju where there was confirmation of African swine fever. (Photo by YELIM LEE/AFP via Getty Images)

The contamination was visible for about 200 meters.

Local authorities dismissed concerns that the blood could cause a spread of the African swine fever to other at-risk animals, saying the pigs were disinfected before they were slaughtered.

The Ministry of Agriculture, Food and Rural Affairs said Tuesday that it has taken emergency measures to block the outflow of blood into other regions, according to The South Korea Herald. The ministry said it would look into whether regulations had been followed leading up to the incident.

The Ministry of Environment said it would check the affected region to make sure drinking water wasn’t contaminated.

African swine fever is highly contagious and incurable, with a nearly 0 percent survival rate for pigs. However, it not thought to be transferrable to humans. It has been sweeping across Asia and Europe, devastating hog farmers.

The fever has only recently spread to South Korea, and there was speculation it arrived through the heavily guarded demilitarized zone (DMZ) which separates North and South Korea.

The fever was discovered in North Korea in May, and the South had gone to great lengths to keep it out.  South Korea saw its first case in the middle of September, and now there are up to 13 cases across 6,700 pig farms in South Korea.

China, Vietnam and the Philippines have been particularly hard hit by the outbreak. Around 1.2 million pigs in China have been culled so far.

Steve Meyer, an economist for the National Pork Board, told ABC 3340 that China consumes about 54 million metric tons of pork per year. It has lost about half of that supply to the fever.