China says 12 out of 454 people survived Yangtze River sinking, down from earlier figure of 14 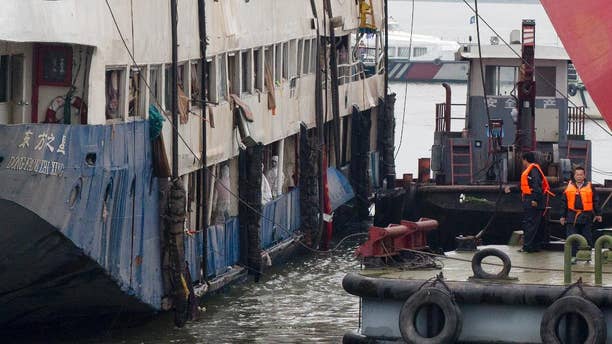 FILE - In this June 7, 2015 file photo, a Chinese rescuer, second from right, throws flowers into the Yangtze River to pay respects to the victims after a memorial service near the raised capsized ship Eastern Star in Jianli county of southern China’s Hubei province. Chinese authorities slightly revised the number of people who survived when the river cruise ship capsized this month, saying that 12 of 454 people on board lived, down by two from the previously reported number of 14, a state broadcaster said Saturday, June 13, 2015. (AP Photo/Andy Wong, File) (The Associated Press)

A Chinese state broadcaster says authorities have confirmed that 12 out of 454 people on board a cruise ship that capsized earlier this month survived, down by two people from the previously reported number of 14 survivors.

China Central Television did not explain why the number of survivors from China's deadliest boat disaster in decades had been revised in its Saturday evening report.

It said each of the 454 people aboard East Star has been accounted for. There were 403 tourists, five tourism agency workers and 46 crew members on board when the boat capsized June 1 during a cruise on the Yangtze River.

Authorities have attributed the sinking to a freak storm that generated tornado-like winds, but also have launched an investigation.