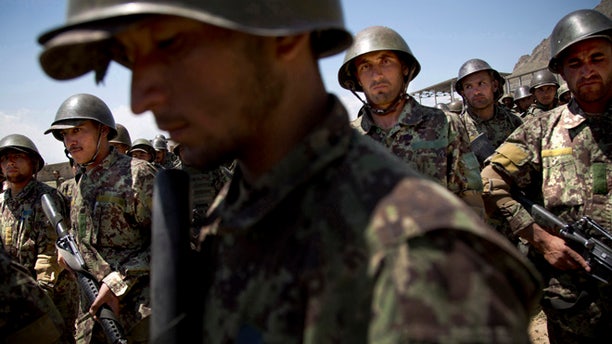 May 8, 2013: In this file photo, Afghan Army soldiers gather at a training facility in the outskirts of Kabul, Afghanistan. (AP/File)

The Taliban failed to capture any ground from Afghan security forces fighting for the first time without foreign firepower this fighting season, U.S. officials say, but the insurgents killed scores of soldiers, police and civilians in their campaign to weaken the government.

American and NATO officials say the fledgling army and police aren't ready to wage a sustained war against a determined insurgency.

Coming just 13 months before most foreign forces are to withdraw, the mixed results reported by U.S. military officials underline the unresolved question of whether some of those forces should stay.

The assessment adds urgency to the need for the U.S. and Afghanistan to sign a much-delayed security agreement that will allow a residual foreign force to stay on after the Dec. 31, 2014 withdrawal deadline.

The U.S. says the one issue still to be decided is which courts — U.S. or Afghan — will prosecute crimes committed by American forces stationed here. Washington is expected to keep about 10,000 troops in Afghanistan after 2014, provided the security agreement is signed and includes immunity from prosecution by Afghan courts.

NATO allies would provide about 5,000 troops, but only if an American presence remains. Billions of dollars in funds for Afghan forces and development also would be jeopardized if no deal is reached.

The 350,000-strong Afghan National Security Forces, made up mostly of the army and police, assumed responsibility for security in June, freeing the foreign forces to focus on training. In so doing, it took the lead against an insurgency that had promised to recapture territory it has lost in the 12 years since the U.S.-led invasion.

"Our efforts to date have enabled Afghans to assume the lead, take the fight to the enemy, and secure the population," Marine Gen. Joseph Dunford, the top U.S. and coalition commander in Afghanistan, said in his fall update to the troops. "But our progress is not yet sustainable."

The Afghans' weakness, say military officials, is logistics — they have trouble with the upkeep of vehicles and other crucial equipment supplied by the West.

Since March, he has closed 54 bases in the east, leaving just 11, plus a coalition presence at six Afghan facilities. Coalition force levels have dropped from about 18,000 to less than 7,500 — nearly all tasked with training.

In April, the Taliban declared an ambitious campaign named after Khalid ibn al-Walid, a companion of the Prophet Muhammad, to retake territory and go on killing foreign troops and government workers.

Army losses were not disclosed, but Gen. Mohammad Salim Assas, who leads the Interior Ministry's police forces, said last week that 1,273 national police, 770 village police and 556 Afghan civilians were killed during the fighting season from the beginning of March to Oct. 25.

He said insurgents mounted 6,604 attacks in 30 of Afghanistan's 34 provinces during that period, including 50 suicide bombings, 1,704 shootings and shellings, 1,186 bombings and 920 ambushes.