An intense manhunt involving aircraft and trained dogs came to an end Tuesday after a female officer was killed in a Baltimore suburb and four teenage suspects who were involved in burglaries in the area were arrested in connection with the slaying, officials said.

The nearly four-year veteran of the force, identified by authorities as Amy Caprio, was responding to a suspicious vehicle call Monday in the community of Perry Hall when Baltimore County Police Cpl. Shawn Vinson said she encountered suspects and was “critically injured.”

"The medical examiner has ruled it a homicide and death was by multiple trauma to the head and torso," Baltimore County Police Chief Terrence Sheridan said during a news conference. He also confirmed that the slain officer did not have a gunshot wound.

As the incident was unfolding, Maryland Gov. Larry Hogan previously tweeted that the dead officer had been "shot in the line of duty."

Baltimore County Police and Fire announced on Twitter that all four of the suspects were teenage males.

"Detective(s) have verified that the group were involved in burglaries in the area," the agency said. "Officers will be in the area today to canvass for property stolen during these burglaries." 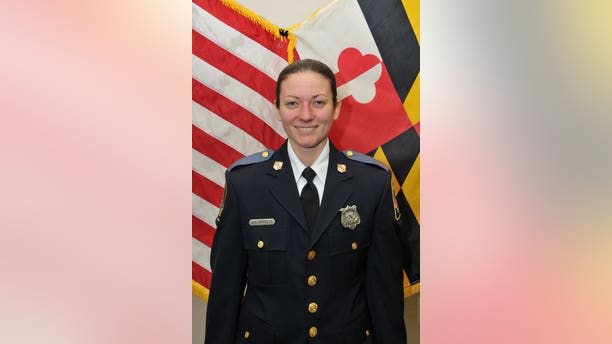 One of the teenagers involved in the killing was identified by authorities as Dawnta Anthony Harris from Baltimore, who admitted in court documents obtained by FOX45 that he "drove at the officer" when she told him to get out of the vehicle while three others burglarized a house. 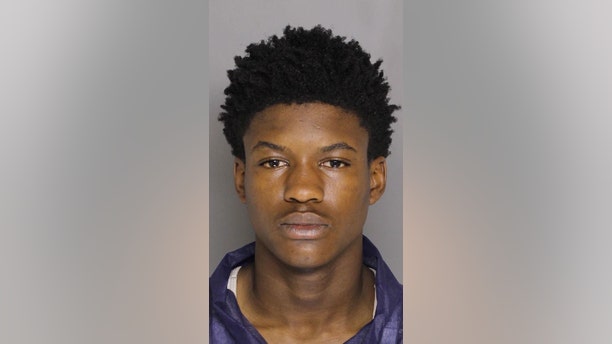 Harris has been charged as an adult with first-degree murder and is being held at the Baltimore County Department of Corrections, according to police. The 16-year-old appeared before a judge on Tuesday, where prosecutors said he on house arrest with an ankle bracelet when officer was killed. The 16-year-old has been involved with 4 other cases involving theft of a motor vehicle.

"I'm the last 6 months, no offense, but your client is a one man crime wave," Judge Sally Chester said.The other teenagers have not been identified.

Baltimore County Police Chief Terrence Sheridan said at a news conference the fallen officer was wearing body camera, and the footage will be reviewed later as part of the investigation. 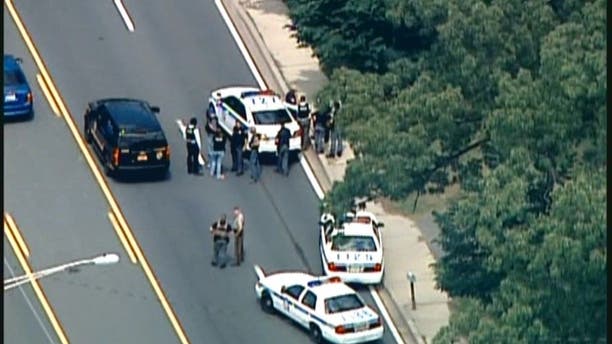 The manhunt intensifies for the suspects who killed a female Baltimore police officer Monday afternoon. (WJAZ)

He added that that Americans are "seeing something in this country we've never seen before."

"Officers who have died at the hands of gunshots is up," Sheridan said. "This is a bad time in the United States for law enforcement."

A man who said his son witnessed the deadly incident told FOX45 the officer tried to pull over the Jeep.

After the officer raised her gun at the people in the vehicle, the Jeep accelerated and "ran right over her, and raced out of the neighborhood," Tony Kurek told FOX45.

Logan Kurek, who is a volunteer firefighter, told the Associated Press he heard his younger brother "frantically screaming,” and ran to perform CPR on the officer who was bleeding from her injuries.

Kurek's neighbor, Dahle Amendt, said he had just settled into his recliner for a rest when he heard a woman's voice outside his house.

The officer was rushed to a nearby hospital where she was pronounced dead.

Authorities recovered an abandoned Jeep that was used in the killing, police confirmed to Fox News. The slaying marked the first time a female police officer was killed in the line of duty in the 148-year history of the Baltimore County Police Department. 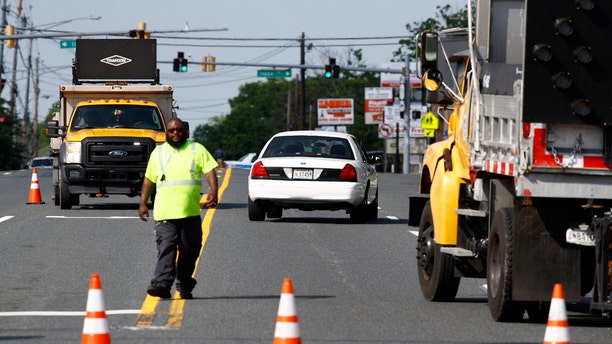 An emergency vehicle passes a roadblock near a scene where a Baltimore County police officer died, while investigating a suspicious vehicle, Monday, May 21, 2018, in Perry Hall, Md. (AP Photo/Patrick Semansky)

"What exactly happened, we are not sure yet until an autopsy is performed," Vinson said at a news conference Monday. It was not immediately clear whether the officer fired her weapon in the incident.

Maryland Gov. Larry Hogan  said in a statement that Caprio "bravely made the ultimate sacrifice for the safety and security of our citizens."

Investigators had urged residents in a sizable swath of Perry Hall to stay hunkered down inside their homes and lock all doors and windows as officers search the community fringed with woodlands.

Three elementary schools were kept on alert status for hours, with students and teachers told to stay in their school buildings as police continued a search for the suspects. But by Monday evening, parents were allowed to come to the schools to pick up their youngsters. 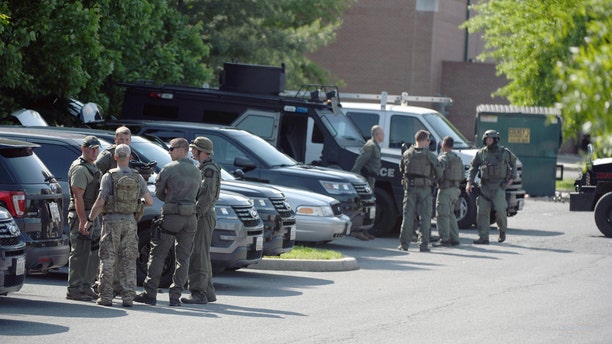 Tactical police stage in a Safeway parking lot on Belair Road near Chapel Road in response to the death of a Baltimore County police officer in Perry Hall, Md., May 21, 2018. (Jerry Jackson/The Baltimore Sun via AP)

Since the start of 2018, at least 36 law enforcement officers across the U.S. have died while on duty -- with 24 of the deaths caused by gunfire.

Roughly 135 cops died in 2016, making it the deadliest year for police officers in at least five years, Fox News has found. While there were fewer deaths in 2017, the numbers weren’t much better: A total of 129 officers died last year. And 46 of those were caused by gunfire.