A major California branch of the Service Employees International Union [SEIU] recently settled a contentious sexual-harassment lawsuit with a former employee that included misconduct accusations against the union’s national leadership and prompted the organization to overhaul its internal sexual-harassment policies.

The lawsuit, originally filed in California Superior Court by Mindy Sturge, claimed that the director of the SEIU United Healthcare Workers [UHW] West’s Kaiser division assaulted her. The episode, which she said occurred toward the end of September 2017, left Sturge with a head injury that she sought medical attention for, according to the lawsuit she filed.

The director, Marcus Hatcher, was fired from his position in November 2017. It's unclear, however, if Sturge ever filed criminal charges against him. Her civil complaint does not specify whether she went to police to file criminal charges.

Listed numbers for Hatcher were out of service. 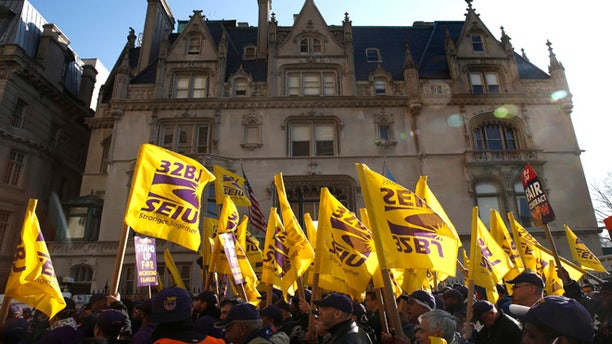 Members of the Service Employees International Union (SEIU) at a protest in support of a new contract for apartment building workers in New York City in 2014. (REUTERS/Mike Segar, File)

Additionally, Sturge claimed in a sworn affidavit that she believed Hatcher had put something in her drink that caused her to black out and become “violently sick shortly after drinking it.” Sturge was also shown photographs of herself kissing Hatcher on the night of the alleged drugging; she said she has no recollection of it.

“We were made aware of the incident,” Steve Trossman, a spokesman for the SEIU-UHW, said. “We immediately hired an outside investigative firm to investigate the complaint. They completed their report and we terminated the employee the allegation was against.”

“We immediately hired an outside investigative firm to investigate the complaint. They completed their report and we terminated the employee the allegation was against.”

Beyond Hatcher’s alleged assault, Sturge’s lawsuit and affidavits from former SEIU-UHW employees painted a picture of a workplace culture saturated with alcohol and rife with sexual misconduct and misogyny. Trossman pushed back on the characterizations of the workplace depicted in the court documents, calling it unfair and inaccurate.

The Pittsburgh-based web outlet Payday Report first reported the news of the settlement, though Trossman took issue with much of the outlet’s reporting.

Fox News based its reporting off public court documents, some of which were available through Payday Report, and numerous interviews with SEIU-UHW members, contractors and officials. Attorneys for Sturge didn’t respond to several requests for comment.

Eight affidavits, including Sturge’s, were entered a week before discovery closed, Trossman said. Given the short window to request depositions, the spokesman said SEIU-UHW lawyers were able to depose only one woman, Veronica Lowery, who recanted her claims of sexual misconduct against SEIU-UHW President Dave Regan.

Most of the accusations in the affidavits leveled claims of misconduct at Regan and SEIU-UHW Vice President Stan Lyles. Taken together, they painted a picture of a workplace culture rife with misconduct and misogyny. Regan was accused multiple times of drinking to the point of drunkenness at union functions and Lyles was depicted as a cohort and enabler of his.

“Any people who are around the union know it’s not true, there’s nothing to discipline them over."

Trossman disputed the allegations against the union vehemently. He said the 200,000-member SEIU-UHW has filed a defamation lawsuit against one woman who gave allegedly false and slanderous interviews to Payday Report about the union’s workplace culture.

“She did an interview with [Payday Report] in which she continued to slander the union with false statements, and so we filed a lawsuit against her,” Trossman said.

He added that the union had no plans to discipline either Regan or Lyles. Both have been campaigning for reelection to their posts within the union.

“Any people who are around the union know it’s not true, there’s nothing to discipline them over,” Trossman said. “… They played this off as though it’s like crazy wild times, and that’s just not how it is.”

Neither Regan nor Lyles was named as a defendant in Sturge’s lawsuit. Allegations against the two were included in affidavits, only one of which was able to be challenged through a deposition by SEIU-UHW’s attorneys.

Trossman told Fox News the union chose to settle the lawsuit on the advice of its insurance carrier, which he said determined the settlement would be less expensive than litigation. He added that disgruntled employees filed all but one of the individual affidavits in Sturge’s lawsuit. The one who remained employed by the union was Lowery’s, who later recanted in a sworn deposition.

The 2017 incident that allegedly left Sturge traumatized with a head injury that required medical attention set into motion an overhaul of the union’s sexual-harassment protocol. The new policies resulted in a total reimagining of the way the SEIU handled sexual-harassment allegations, according to Emily Austin, a sexual-assault expert whom the union hired to overhaul its policies.

“My experience is that they were very interested in talking about this issue head-on, that they were transparent and very behind a comprehensive approach,” Austin said.

Her work with the union began around February 2018, and has continued today. She said the SEIU was the only organization with whom she’s worked, of more than a dozen across California, which has committed to an ongoing overhaul of its sexual-harassment protocols.

“It was the most serious and supported by administration of any organization I’ve worked with."

She said she’s approached sexual harassment training from a trauma-informed lens, a perspective that centered investigations around victims in a way that’s meant to support and avoid retraumatizing them.

Now, she said the union has taken a preventative approach to sexual harassment through continuous training and staff-wide education.

“It was the most serious and supported by administration of any organization I’ve worked with,” Austin said. “… Their stance now is to live and lean into a trauma-informed framework.”

Austin said she didn’t work one-on-one with Regan or Lyles, but broadly observed members and management alike engaged and attentive during her trainings. She said there have been multiple trainers per year per employment level, meaning all employees – from management down – have been receiving extensive sexual-harassment education.

“After that one incident, there was a much greater awareness that everyone was on the same page and everyone understood what are the expectations of the executive members,” said Gisella Thomas, a 12-year union veteran and respiratory-care practitioner in California.

Thomas, whom the SEIU-UHW granted permission for an interview with Fox News, said that sexual-harassment training has always been present, but became more focused and serious after Sturge’s 2017 allegation.

Thomas also has been a volunteer member of the committee writing the language in the code of conduct, the roadmap for the union’s sexual-harassment policies.

If you’ve been the victim of workplace sexual harassment and want to share your story, contact Andrew Keiper at andrew.keiper@foxnews.com.