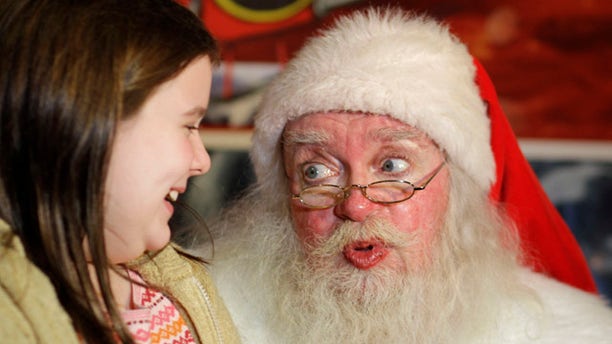 John Toomey, the naughty Santa Claus who was fired from Macy's, visits with nine-year-old Retta Campbell of Sebastopol, Calif., on the first day of his new job in San Francisco, Friday, Dec. 10, 2010. Toomey lost his 20-year job playing St. Nick at the Macy's downtown San Francisco store last weekend after an adult couple complained about a joke he made. He has since taken up a position playing Santa at Lefty O'Doul's, a nearby pub. Earlier this week he was on Jay Leno's "Tonight Show." (AP Photo/Eric Risberg) (AP)

Kids who once thrilled at sitting on Santa's lap at the 14th Street McBurney YMCA's wildly popular annual holiday luncheon will now suffer the icy embrace of a talking snowman and his sidekick, an anonymous penguin, at today's event.

Forget about bringing a list or checking it twice -- Frosty doesn't take gift requests, and doesn't care if you're naughty or nice.

YMCA officials, who say they are in the midst of "rebranding" the Young Men's Christian Association to "The Y," defended their decision.

"It wasn't replacing; it was transitioning," said John Rappaport, executive director of the McBurney YMCA. "We realized that change is sometimes good, and that Frosty is a great winter character who would appeal to a broader number of kids."

The decision to ditch Father Christmas came down from McBurney branch administration, not the Y's Chicago headquarters.

A chilly reception greeted the news that the YMCA -- an organization founded to spread Christian values in 1844 -- was replacing the Christmas icon with a secular cartoon character.

"Christmas is not about Jack Frost; it's not about snowmen," fumed Bill Donohue of the Catholic League. "We're not talking about some secular organization that has no religious roots. If they can't celebrate Christmas, then they should check out. What a bunch of cowards."