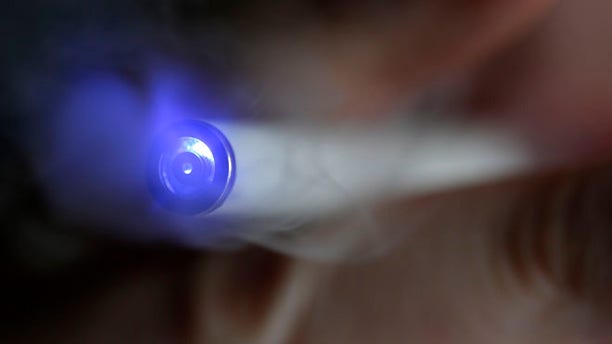 March 5: A man uses an E-cigarette, an electronic substitute in the form of a rod, slightly longer than a normal cigarette, in this illustration picture taken in Paris. (Reuters)

New Yorkers who say electronic cigarettes helped them quit smoking asked city lawmakers at a hearing this week not to ban the nicotine inhalers from restaurants, workplaces and other indoor spaces, saying there isn't enough evidence they pose a health risk to justify their exclusion.

"The facts are that this isn't smoking," Jesse Gaddis, a representative from Brooklyn-based Bedford Slims, an e-cigarette company, told The New York Post as he exhaled wasps of white mist during his testimony. "This is vapor."

Another attendee at Wednesday's meeting said, "These people would try to get you to prohibit penicillin ... if there was grant money in it."

Public health officials have asked the City Council to enact legislation that would add e-cigs to the 12-year-old law that drove smokers out of the city's taverns, nightclubs and office buildings, and forced them to satisfy their nicotine habits on the frigid (or broiling) sidewalks.

Today, the sight of someone puffing away indoors is somewhat shocking in New York, but it is becoming more common again as electronic cigarettes become more popular. Proponents of a ban told the council's health committee that e-cigs are threatening to undermine one of the key benefits of the original smoking ban, which was to make it socially unacceptable to smoke indoors.

"Waiting to act could jeopardize the progress we've made in the last 12 years," said the city's health commissioner, Dr. Thomas Farley. He also said that electronic cigarettes make enforcement of the rules against tobacco smoking more difficult, since the two products look so much alike.

Farley added that too little was known about electronic cigarettes to say whether they are safe to use, or whether they actually help people quit smoking for good.

The hearing featured entrepreneurs who have invested in e-cigarette companies, advocacy groups that argued both for and against the proposed ban, and so called "vapers," or people who have traded lungfuls of tobacco smoke for the less odorous puffs of vaporized liquid nicotine given off by the battery-powered electronic cigarettes.

Some puffed on the devices as they testified, and talked about how much healthier they have felt since giving up tobacco.

Health advocates have raised concerns that the inhalers, which have soared in popularity, can get people hooked on nicotine just like cigarettes, and might be taken up by people who have never smoked before, rather than only people trying to quit.