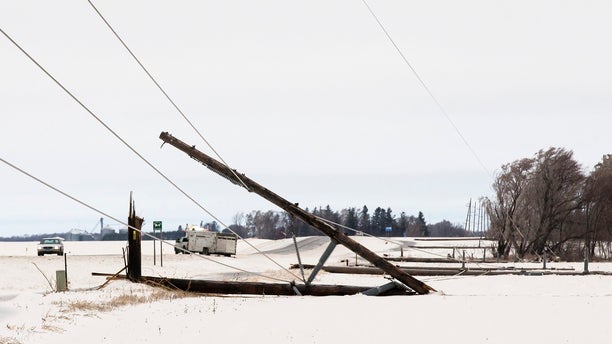 A row of power line poles are snapped from ice and wind along Hwy. 56 south of Interstate 90 on Thursday, April 11, 2019, near Browndale, Minn. A powerful spring snow storm is creating hazardous travel conditions in parts of the Midwest and Great Lakes regions. (Andrew Link/The Rochester Post-Bulletin via AP)

The surprise springtime snowstorm that continues to pound Minnesota prompted Gov. Tim Walz on Thursday to authorize the mobilization of the National Guard to provide assistance to areas struggling with power outages and flooding.

“The Minnesota National Guard will assist with search and rescue operations and has already opened armories in Owatonna and Albert Lea to be used as shelters,” Walz said in a signed state of emergency declaration for 64 counties and three tribal nations.

It was not immediately clear how many Guard members were called up. The snow, sleet and ice created treacherous travel conditions that resulted in hundreds of crashes and several highway closures, the Star-Tribune reported. Multiple school districts canceled classes in Minneapolis and St. Paul on Thursday and hundreds of flights out of Minneapolis-St. Paul International Airport were delayed.

Close to 10 inches of snow has fallen on several parts of the state. A blizzard warning remained in effect for most of western Minnesota until 10 a.m. Friday. One confirmed death was reported since the storm began Wednesday.