A Kansas dog who has lived in an animal shelter for more than a year was finally adopted on Tuesday, a week after a man moved into the shelter to try and help find the dog a home.

Scott Poore, whose organization “Mission Driven” creates and promotes fundraisers to aid animal shelters, said he moved into the Great Plains Society for the Prevention of Cruelty to Animals (SPCA) in Merriam last week when he heard a 3-year-old terrier mix named Queen was having trouble getting adopted and seemed depressed.

Poore described Queen as “the most affectionate lovable dog I probably have ever worked with.” 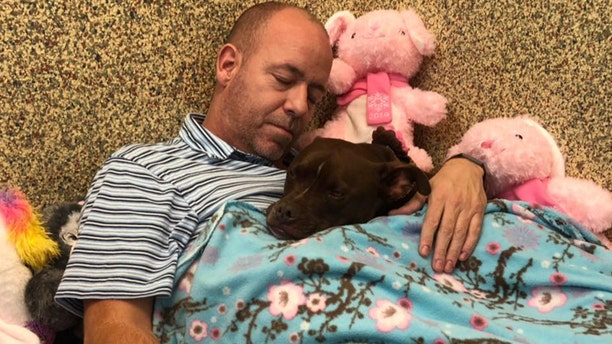 Scott Poore and Queen. Poore decorated the dog's room and moved in with her with the goal of attracting the attention of a potential adopter. (Mission Driven)

Mission Driven posted a video of Queen jumping into a black SUV with her new owners on Tuesday afternoon.

Poore told Fox News Wednesday that he spent seven days and seven nights living with Queen, saying he was determined to help her get adopted.

“I honestly did not know if I was going to be there 24 hours or a month but I was prepared to do either,” Poore told Fox News, adding that he was grateful he only had to stay for a week.

"Seven nights in an animal shelter is quite a long time I have to admit," Poore said. 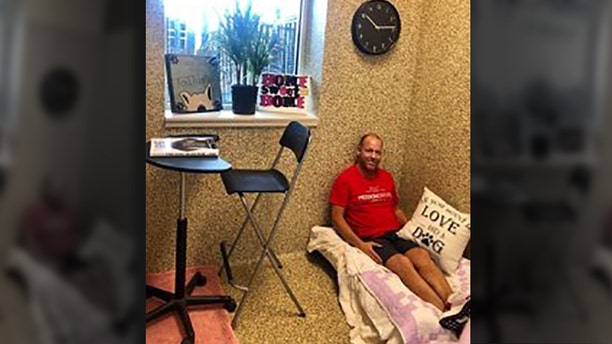 Poore in Queen's room at the SCPA shelter. (Scott Poore)

Poore said he did not get much sleep over the past week “between all the animals barking and Queen every hour on the hour waking me up with her rope toy wanting to play," but added that it was well worth it now that she had been adopted. 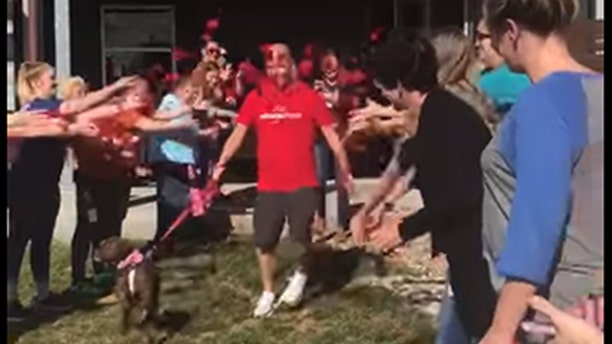 Poore said Queen’s adopters are a father and son from the Kansas City area. He added the two lost their dog three weeks ago and when someone shared Queen’s story with them, they decided to adopt her.

“I just want to thank them for opening up their home and their hearts for such an incredible dog who deserves a long life in a loving home," Poore said. "I had the pleasure of meeting the father and the son and it’s going to be a perfect home for them and for Queen. It’s a win-win for both sides."

Poore told Fox News that he could not adopt Queen himself, as much as he wanted to: “I can’t adopt every animal that I help because then I will have 1000 animals in my house.”

Poore said he is already thinking about the next long-term shelter dog he is hoping to help get adopted: "What helps me get through the emotional side of my work is I move very quickly to the next animal that needs my help."