Tennessee Gov. Bill Haslam granted clemency Monday to Cyntoia Brown, an alleged sex traffic victim who was sentenced to life in prison when she was 16 after killing a man and whose case was championed by celebrities such as Kim Kardashian West, Rihanna and LeBron James.

Haslam commuted her life sentence and Brown will be released to parole supervision on Aug. 7, he said in a statement. Brown had served 15 years in prison before the governor’s decision.

Brown will be subjected to certain restrictions upon her release, according to The Tennessean. Brown must report to counseling sessions and will need to complete 50 hours of community service. Brown will also be required to work with at-risk youth and be required to get a job. 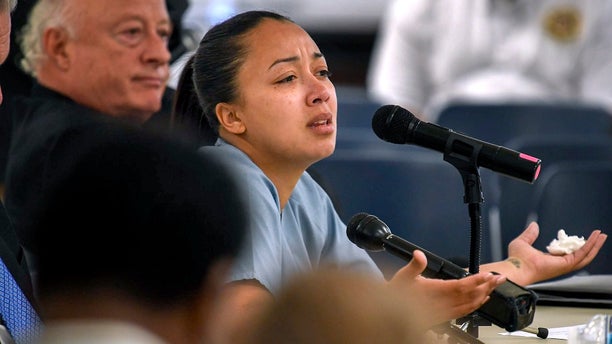 Cyntoia Brown appearing in court during her clemency hearing at the Tennessee Prison for Women in Nashville, Tenn.  (Lacy Atkins/The Tennessean via AP, Pool, File)

Brown thanked Haslam in a statement through her lawyers for his “act of mercy in giving me a second chance.”

“With God's help, I am committed to live the rest of my life helping others, especially young people. My hope is to help other young girls avoid ending up where I have been,” Brown’s statement read.

Brown’s case resurfaced late last year after several celebrities called on authorities to release her from prison. Rihanna, Kardashian West and James were among Brown’s supporters.

“The system has failed. It’s heartbreaking to see a young girl sex trafficked then when she has the courage to fight back is jailed for life!” Kardashian said in a November 2017 tweet. “We have to do better & do what’s right. I’ve called my attorneys yesterday to see what can be done to fix this.”

Brown, now 30, was convicted of first-degree murder in 2006, for killing 43-year-old Johnny Allen. Brown said at the time she was forced into prostitution and was scared for her life before she shot and killed Allen. At the time, prosecutors said Brown killed Allen to rob him.

She was tried as an adult in 2006 and convicted of first-degree murder. Since she’s been in prison, Brown has earned her associates degree from Lipscomb University, WZTV-TV reported. She is also working on a bachelor's degree, according to the news station.

Brown wouldn’t have been paroled until she was 69 if not for Haslam’s clemency. It was the Republican governor’s first clemency grant of his tenure.